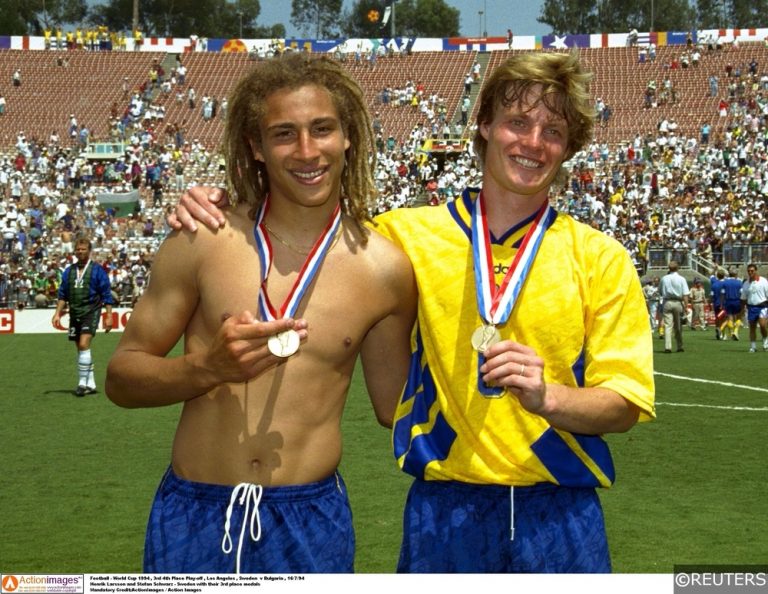 1966 remains the golden, mythical year for England fans and that legend will only grow until the Three Lions finally emulate Charlton, Moore, Hurst and co and win a second World Cup. Incredibly that could happen in less than ten days time but if football really is going to come home, then England are going to have to first get past a Sweden side who are also dreaming of matching the achievements of their predecessors.

Sweden may never have won the World Cup but they have made the last four on four separate occasions, twice as many as England. They were runners-up on home soil way back in 1958 but for more recent generations of Swedes, the World Cup dream revolves around trying to match the class of 1994.

The Scandinavians reached the Semi-Finals in USA that summer and 24 years on they have the chance to equal that feat on Saturday in Samara when they take on England. In truth the 1994 side was blessed with far more individual quality than this current crop so it would be quite an achievement were they to progress into or even beyond the last four but they can certainly take some inspiration from what happen Stateside in the mid 1990’s.

Read more – Mood in Sweden ahead of the England clash

Whereas this current Sweden side is based around a real team ethic and solid defence, the Swedish side that headed to the 1994 World Cup did so boasting an attacking quartet that they believed could fire them to the latter stages of the tournament.

The star was Tomas Brolin of Parma in Italy who had finished as the joint top scorer at the European Championship in Sweden two years earlier. He had famously eliminated Graham Taylor’s England with a late goal at that tournament and was supported by Martin Dahlin again in the USA. However Sweden also had some tasty alternatives in the shape of a 22 year old Henrik Larsson while Kennet Andersson provided an aerial threat.

The four forwards scored 13 goals between them in 7 matches at the 1994 World Cup with each one netting at least once. That was two more than the entire Brazilian squad managed as they won the trophy for the fourth time. As is sometimes the case at World Cups, Sweden’s top scorer was actually the least high profile of the bunch in the shape of Andersson. Only a sub in Sweden’s first game, a 2-2 draw with Cameroon, the target man went on to score 5 goals in the tournament as the Swedes switched to a three-pronged attack with Dahlin and and particularly Brolin occupying slightly deeper roles.

Read more – How Sweden are thriving following the ‘Zlatan Era’

By comaprison Sweden’s barren spell in tournament knockouts is a mere 24 years, stretching back to their quarter-final win over Romania on penalties at USA 94. One of them has to win today. #WorldCup pic.twitter.com/BGG2y1jcHN

While England have painful memories of Quarter-Final exits in the noughties, Sweden fans will be reflecting on the much happier outcome of their last appearance at this stage in 1994. Having gone undefeated in a group which included Brazil, Russia and Cameroon, Sweden were dealt a fairly kind last 16 draw against Saudi Arabia. A goal from Dahlin and a brace from Andersson ensured they won that game comfortably 3-1 to progress into a Quarter-Final clash with a talented Romanian side that had just knocked out Argentina with Gheorghe Hagi inspiring a 3-2 win.

Both sides had by this point developed a reputation for attacking, entertaining football and in total contrast to the conservative Sweden team of 2018, all of their matches at that tournament had produced goals at each end heading into the last eight. That trend looked destined to end with the game locked at 0-0 heading into the final 15 minutes but it suddenly burst into life when Tomas Brolin scored from a cleverly worked free-kick to break the deadlock on 78 minutes.

However the Swedish defence couldn’t protect the lead as a scrappy 88th minute goal from Romania’s Florin Răducioiu sent the game into Extra Time. Suddenly Romania had the momentum and Răducioiu once again pounced on hesitant defending to fire his side into the lead. Sweden’s World Cup dream looked all but over but with five minutes left in the second period of Extra-Time, there was another twist as Andersson headed an equaliser for the Swedes to ensure the game would be settled by penalties.

Romania seized back the advantage in the shoot-out as Håkan Mild missed Sweden’s first penalty. However their cool, clinical strikers kept the pressure on with Andersson, Brolin and Larsson all converting from 12 yards. Eventually Romania cracked with Dan Petrescu and Miodrag Belodedici both missing as Sweden advanced into the Semi-Finals with keeper Thomas Ravelli the hero.

Who remembers the day, July 16 1994, when #Sweden defeated Bulgaria & finished 3rd in the #WorldCup? #SwedishSundays pic.twitter.com/YpHFQIdksg

The 1994 World Cup was certainly one for the smaller nations with a Hristo Stoichkov inspired Bulgaria joining Sweden in the Semi-Finals. Both sides had really captured the imagination but both would ultimately fall just short against more established powers in the Semi-Finals.

Italy put pay to Bulgaria’s hopes with a 2-1 win in the first Semi before Sweden faced a rematch with Brazil. The sides had played out a 1-1 draw in the group stage and the Europeans weren’t lacking belief heading into the last four showdown in front of over 90,000 at the Rose Bowl in Pasadena. They were holding their own too for an hour but a silly challenge from Swedish skipper Jonas Thern drew a red card from the Colombian referee leaving the underdogs needing to play out the game one man down. Swedish coach Tommy Svensson had little choice but to break up their attacking trio and bring on an extra midfielder but eventually the pressure told as Romario headed home late on to secure a 1-0 win for Brazil.

To Sweden’s credit they picked themselves up brilliantly and scored four 1st Half goals to thrash Bulgaria in the 3rd/4th place game just three days later. Brolin, Larsson and Andersson all netted and with none of Sweden’s four talented 1994 forwards older than 26, they looked like a team capable of seriously challenging at future tournaments.

What became of Sweden’s exciting 1994 squad?

Sweden surprised many by reaching the Semi-Finals in the United States, not least because it was an exceptionally young squad that crossed the Atlantic. Defender Roland Nilsson was the oldest outfielder at 30 and aside from the forward players, they had some exciting young midfielders in the shape of 20-year old Jesper Blomqvist and 23 year old Håkan Mild while Stefan Schwarz was only 25. Another big prospect was 22 year old defender Patrik Andersson who would go on to play for Bayern Munich and Barcelona.

However he was one of the few that would live up to their early promise. Sweden’s talented squad struggled badly to live up to the standard they’d set in the summer of 94. They failed to qualify for Euro 96 or the World Cup in France and a new generation was largely drafted in after a poor Euro 2000 campaign when the remnants of the 94 squad underperformed and finished bottom of their group.

Henrik Larsson was another who did manage to fulfil his potential but his fellow forwards from 1994 soon faded. Martin Dahlin would go on to have unsuccessful spells at Roma and Blackburn in what was a pretty spectacular fall from grace. Kennet Andersson continued to be a mainstay of the Swedish side but struggled to be anywhere near as prolific and developed more into the typical mould of a classic Scandinavian target-man. Meanwhile Tomas Brolin, the only Swede to make the FIFA team of the tournament in 94, started to be dogged by injury problems later that year and was cruelly forced to retire at the age of 28 following a troubled spell with Leeds in the Premier League.