The Rise of Rashford 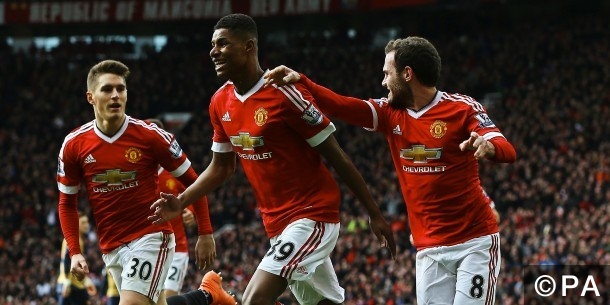 So Marcus Rashford has just been selected to play for England at Euro 2016…he’s only 18!

The exciting young forward joined Man United’s academy system at 7 and only made his first-team debut half-way through the current season.

Since then and in true Man United fashion, he’s started his career with a bang (or 8) and proved that he is certainly a star of the future.

After being named on the first-team bench for the first time earlier on in the season but not actually seeing any game time, Rashford was a late addition to the starting line-up for United’s second leg tie against Midtjylland in the Europa League after Anthony Martial was injured during the warm-up.

He got off to a flyer, banging in 2 goals in a 5-1 Man United win helping to see them through to the next round after previously being 2-1 down on aggregate.

Rashford’s goals made him United’s youngest ever scorer in Europe, beating the record previously held by a true Man United legend, George Best.

Man of the Match

Just 3 days later, Rashford made his Premier League debut at home against Arsenal.

Once again he scored twice whilst also providing an assist for United’s third in what was a thrilling 3-2 win.

Rashford was rightly named man of the match:

Thank you so much to the fans! Let’s focus on next games I will always perform #MUFC
This photo pic.twitter.com/WCGJgj4Zz6

Player of the Month

Having only played 2 games, Rashford was named Manchester United’s player of the month for February:

Proud to be Manchester United Player of the month! #MUFC #Rashford #Manutd pic.twitter.com/zD9XQ5u6gX

After scoring 2 braces in as many games, Rashford earned a starting place for United’s next 5 games before scoring the winning goal in the Manchester derby.

He became the youngest ever scorer in a Manchester derby.

Rashford on the 1-0 win over Watford:

And also to be the youngest Player in history to score in a #ManchesterDerby is incredible. I give 100% every game! #MUFC#Rashford#ManUtd

Rashford then started in 9 of United’s next 10 games and added another 3 goals to his tally in that period.

Bursting on to the scene with 8 goals in 17 games earned him an England call up as Roy Hodgson selected the 18 year old for the preliminary 26-man squad for Euro 2016.

He is 12/1 to be England’s top goalscorer at the competition.

For comparison, Wayne Rooney managed 17 goals in 43 appearances in his first full season at Man United.

Can Rashford become Manchester United’s next big star? Let us know what you think by dropping us a message on Twitter @FootySuperTips