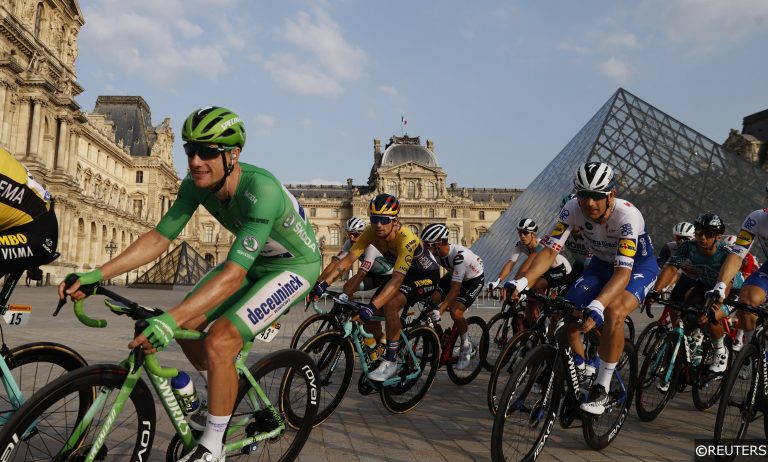 The 109th edition of the Tour de France begins on Friday in Copenhagen, Denmark, and the Racing Post’s Matthew Ireland has picked out a couple of tips ahead of the showpiece event in the cycling calendar.

Read on to see who he thinks will end up with the Yellow Jersey after the final stage at the Champs-Élysées in Paris on July 24.

Cycling phenomenon Tadej Pogacar bids for a third Tour de France success in a row in the 109th edition of cycling’s biggest race and the question is: who can stop the Slovenian?

Pogacar has enjoyed a meteoric rise to the top of the sport and is already the youngest Tour winner in over a century.

His first Tour win in 2020 came in dramatic fashion as he overhauled compatriot Primoz Roglic on the penultimate stage, while last year he stamped his authority on the race at the end of the first week and romped to victory by over five minutes.

If there is any weakness then it could be the quality of the team around him compared to that of Roglic, who can rely on the uber-talented Wout van Aert, American climber Sepp Kuss and Dutchman Steven Kruijswijk, who was third in the 2019 Tour.

Throw wildcard option Jonas Vingegaard, who was second to Pogacar last year after assuming leadership from Roglic after he withdrew due to injury, into the mix and Jumbo-Visma may have the team to dethrone the reigning champion.

A Covid outbreak forced Bora-Hansgrohe’s Aleksandr Vlasov to withdraw from the recent Tour de Suisse when leading the race, but the Russian climber could be someone to watch on his Tour debut.

Vlasov is enjoying one of his best seasons in the pro peloton – winning the Tour de Romandie and Volta a la Comunitat Valenciana and finishing third in a decent field at the Tour of Catalunya.

He was third at last year’s Giro d’Italia, showing he has the stamina to last three gruelling weeks of a Grand Tour, and will be aiming to continue the success of his team, who celebrated a Giro win courtesy of Jai Hindley in May.

Experts pick out 622/1 acca for the EFL opening weekend!