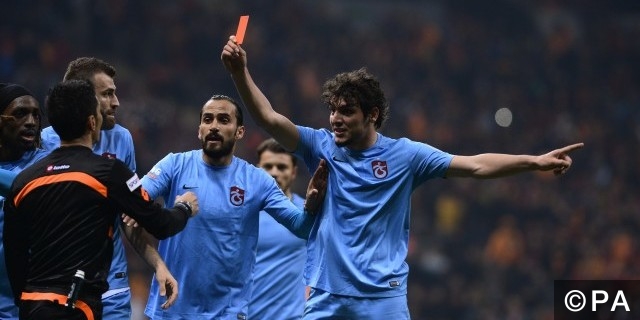 Turkish football is never dull or boring, flares are common and they’re are arguably more hardcore fans in Turkey than anywhere in the world. However 1 Trabzonspor fan took things too far during his sides 4-0 loss to Fenerbahce as he took his frustration out on the 5th Official behind the goal.

The incident occured following an wave after wave of Fenerbahce pressure who led 4-0 thanks to goals from Potuk, Sen and former Manchester United players Nani and Robin Van Persie.

In the 75th minute, things got too much for one fan as he pushed the 5th Official to the floor and proceeded to kick him before a member of security intervened and tackled the fan before any further injury could occur.

You can watch this horrific incident below

This incident does not help the countries reputation when it comes to football. Racism and match fixing are the usual suspects so we should not really be surprised to see such abhorrent behaviour. Emotions get high in football, but there’s no room for any act of violence at a game.

Here’s another view of the incident taken from a fan

The game was abandoned following the incident.

If you had a bet on the game, then the leg will be void in all accumulators. We have an Overnight acca available for you here. For daily accumulator tips make sure you bookmark our Free Betting Tips page.