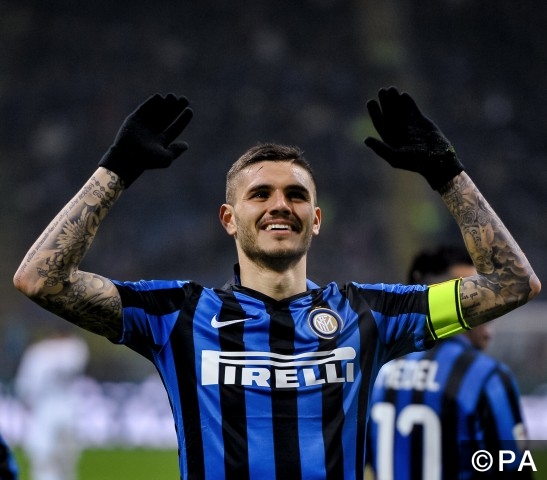 Following Arsenal’s failed £35 million bid for Lyon striker Alexandre Lacazette, Arsene Wenger may turn his attention elsewhere, with Inter Milan forward Mauro Icardi likely to be his main target. Lyon have already made it clear that they are not willing to sell their star man Lacazette for anything less than £40 million, which seems to be higher than Wenger’s valuation of the striker, who has bagged 72 goals in 173 appearances for the French side.

Icardi is one of the most promising talents coming out of the Serie A, and at only 23 years of age, could turn in to one of the most potent strikers in world football. During his time at Inter Milan, he has scored an incredible 47 goals in just 88 appearances, including a 16 goal haul last season. He signed for Inter after a successful season at fellow Serie A side Sampdoria, after scoring 11 goals in 33 appearances.

It is believed that the deal would set the London based club back £50 million, however they will face stiff competition from Napoli after they recently lost their star striker Gonzalo Higuain to Serie A rivals Juventus. Napoli are reportedly willing to pay around £60 million for the Argentinian, who has earned just 1 cap for his country.

It appears that Paul Pogba won’t spell the end of United’s spending spree this summer, as Mourinho looks to bolster his defensive options by signing the vastly experienced Jose Fonte from Southampton. The deal is likely to set the Red Devils back just £9 million, however there has also been interest from Everton, with Ronald Koeman likely to be a huge pull factor. Fonte played a key role in Portugal’s Euro 2016 triumph, putting in a solid performance in the final to nullify France’s attacking threats. The 32-year old may not have many years left in him as a top quality centre half, but he can certainly use his experience to mold 26-year old Chris Smalling and new signing Eric Bailly in to top quality defenders.

Fonte has been at Southampton for 6 years, originally joining the Saints whilst they were plying their trade in the League 1. In his debut season, he scored an incredible 7 goals and was named in the League One team of the year as he helped his club earn promotion to the Championship. He played every game in the next season, where he saw his side earn back-to-back promotions and earn a spot in the Premier League. Since then, the fairytale has continued, with the Saint’s earning a spot in the Europa League qualifying round last season and group stages this year.