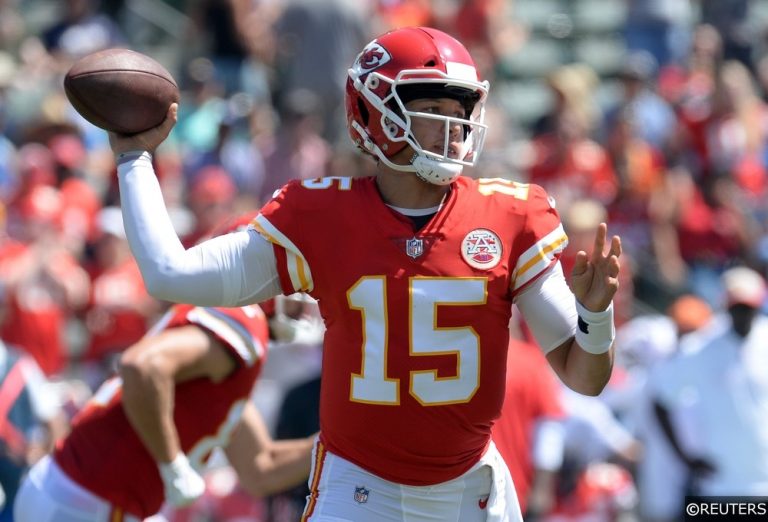 The 9-1 Kansas City Chiefs take on the 9-1 LA Rams in week 11 on Monday Night Football. Two high powered offenses go head to head in what promises to be one of the most entertaining games of the season. This would easily be a mouth watering Super Bowl clash and we get it during the regular season!

This game has already had some drama, it was originally supposed to be played in Mexico City but the NFL decided to move it to LA on Tuesday night due to poor field conditions at the Estadio Azteca. It’s believed that music concerts and soccer matches left the field in a terrible conditions which you can see below.

From a betting point of view this game has opened at a historically high total of 64 with bet365.

Will it go over the total?

The weather forecast for the game on Monday Night in LA is zero wind and 21 Celsius – perfect scoring conditions.

Since 1990, no total has opened higher than 62. There has been 11 totals close at 57.5 or higher since 2003 and they have all gone over the total, that includes three this season. 11-0 is very impressive for high totals but what’s even more impressive is that they’ve beaten the points total by an average margin of just over 10 points.

Many bettors are usually put off by high totals but it’s hard for bookmakers to price up these games with high powered offenses in what’s now a pass first league for most teams. You only have to take the Saints vs Rams game in week nine of this season which highlights that. The line opened at 60, got bet down by sharps to 57.5 and we saw 80 points on the board.

If you’re having a bet on the NFL this week then be sure to check out our NFL predictions for more great betting insight.