The draw for Wimbledon 2019 was made on Friday morning. Here we take a look at what it means for the main players from both the Men’s and Women’s Singles.

Arguably the biggest news from the Men’s championship is that the defending champion, Novak Djokovic, will avoid the other members of the ‘Big Three’ until the final with rivals Rafael Nadal and Roger Federer being drawn in the same side. The Serb will begin his Wimbledon title defence on centre court at 1pm on Monday against 2012 quarter-finalist Philipp Kohlschreiber with things set to get much tougher by round 4.

Federer is bidding for a record-extending ninth Wimbledon title and has been drawn to face a Wimbledon debutant in the shape of 22-year-old South African Lloyd Harris in the first round. Although he won’t be taking his foot off the gas in any round, the Swiss will be pleased with his potential route to the final where is first likely real test could be against Kei Nishikori or John Isner.

Undoubtedly the toughest task of the main players was handed to Rafael Nadal. The two-time champion has already spoken about his displeasure at being seeded behind Federer, ranked one place below him, and will be even more disappointed to learn that his road to the final looks to be much more difficult than his two main rivals. Assuming the Spaniard get through his first round match again Japanese qualifier Yuichi Sugita, he then faces a mouthwatering clash against the enigmatic and unpredictable Nick Kyrgios. This potential match has been made even tastier by the intense rivalry that the pair have shared in recent time in which both men have thrown around insults at one another after various altercations. Should he prevail there, the world number 2 could face Marin Cilic, Dominic Thiem and Roger Federer all before getting to a potential final against current Wimbledon champion Novak Djokovic. 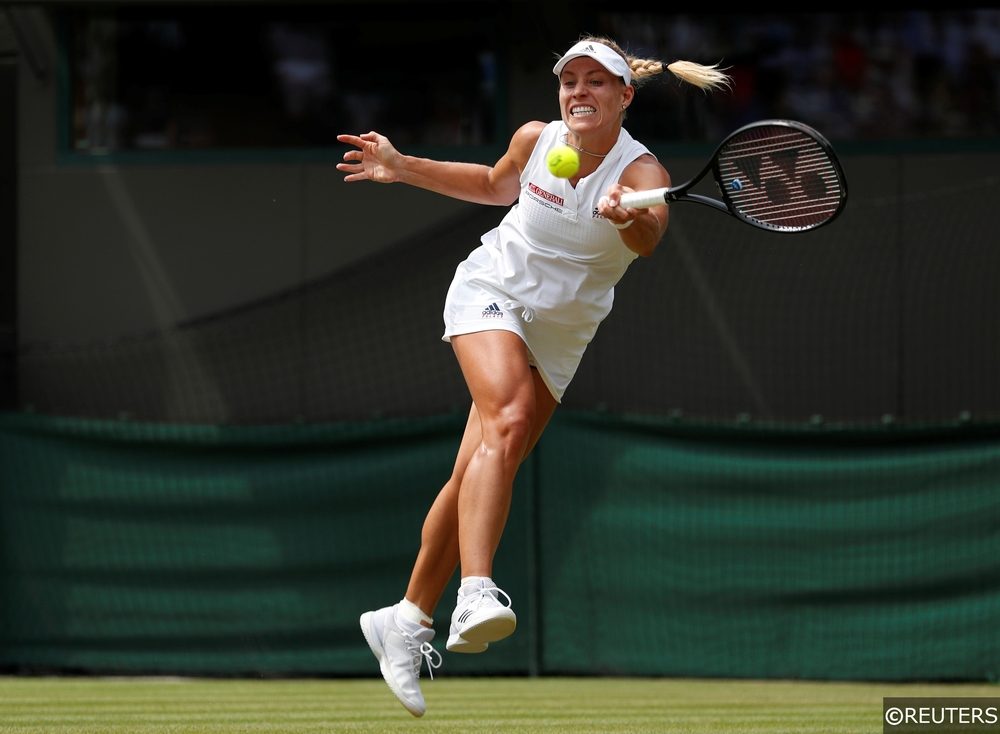 The Women’s draw has also thrown up some very interesting ties and potentials with last year’s champion, Angelique Kerber, starting against fellow German Tatjana Maria. Having been drawn on the same side, the 5th seed could then face 23-time Grand Slam winner, Serena Williams. The American kicks off her campaign for an 8th Wimbledon crown against Italian qualifier Giulia Gatto-Monticone.
World number one Ashleigh Barty opens up against the number 43 ranked Chinese player, Zheng Saisai. Should she get through that a highly anticipated 3rd round clash with the 2017 Wimbledon champion, Garbine Muguruza.

Perhaps the story of all the first round draws came when 15-year-old Cori Gauff, the youngest player to qualify for Wimbledon since the Open era, was paired with 5-time champion Venus Williams in the first round. It’s an all American clash in which the two competitors are separated by a whopping 24 years and should be well worth the viewing.

What about the British charge?

There’s no Andy Murray in Singles action this year with the 2-time champion reducing his schedule to Doubles matches only as he bids to regain fitness after a long term hip problem. Still, 10 Brits have made it through to the singles and many have live chances of progressing on from the initial matches.

That leaves Kyle Edmund as the highest-ranked British player in the Men’s championship at 30. He faces Spain’s Jaume Munar in the opening round on Monday and will be hoping to set up a tie against 7th seed Stefanos Tsitsipas around a week later.
Of the remaining men, Dan Evans and James Ward could face a 2nd round tie against each other if they can get through their matches vs Federico Delbonis and Nikoloz Basilashvili. Paul Jubb makes his first appearance at Wimbledon against João Sousa while fellow Brit, Cameron Norrie plays Denis Istomin

Britain’s main hope in for Women’s title, Johanna Konta, plays Romanian qualifier Ana Bogdan on Tuesday. The 28 year old reached the semi-finals in 2017 and, despite potential clashes with Sloane Stephens and and former champion Petra Kvitova en route, she could well go a long way in this year’s championship.
Heather Watson has made the main draw for the past 9 years and is rewarded this term with a first round tie against American qualifier Caty McNally.