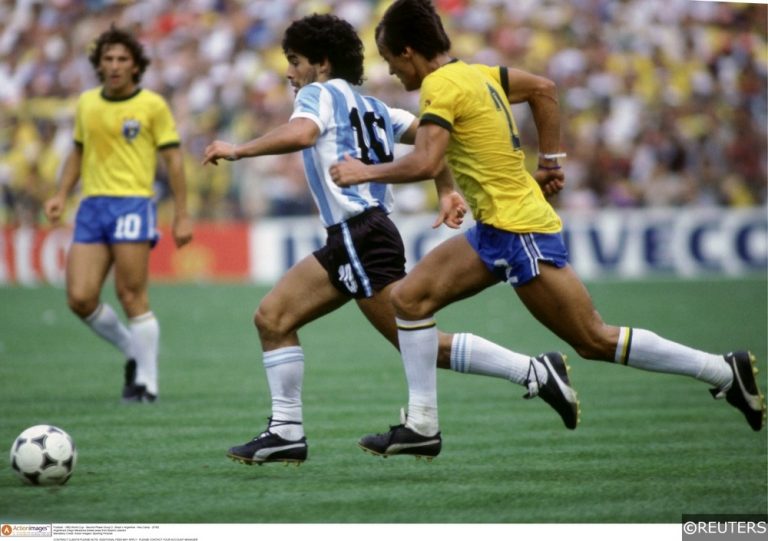 Argentina’s famous blue and white stripes are synonymous with the World Cup. Some of the world’s greatest goalscorers have donned the Albiceleste shirt, with the likes of Batistuta, Maradona, Kempes and Messi having sent fans into raptures on more than one occasion.

Overall, Argentina have scored 131 goals in 77 World Cup matches and in the following article we try to narrow that down to just five. The following quintuple is not necessarily comprised of the most beautiful goals but certainly the ones that have the longest lasting legacy back home. The goals that made tears flow in Buenos Aires, fernet spill in Córdoba, beers fly in Rosario and brought about a collective roar that saw each individual Argentine come together as one for the love of their national team.

Check out our breakdown of this year’s men looking to join the below list in our Argentina squad feature.

“You cannot imagine what it meant to be able to bring that joy to 25 million Argentines.” – Mario Kempes.

In the midst of a harsh military dictatorship, which had left the team’s participation in question altogether, the 1978 World Cup was a time for Argentines to unite for a home World Cup. La Selección managed to fight their way through to the final, where a tough clash against Holland would await.

The atmosphere in River Plate’s Monumental was simply electric as over 70,000 fans draped Argentina flags wherever you looked. 90 minutes passed in thunderous fashion, with the hostile crowd baying for blood as foul after foul went in. Mario Kempes, already coming into the game on 4 goals in the tournament had given Argentina a 1-0 lead late in the first half, but the Dutch levelled the game up 8 minutes from time and almost won it at the end after hitting the post, leaving hearts in mouths going into extra time.

And then it happened; the goal that will be forever entrenched in the heart of each man, woman and child, the goal that set Argentina on the way to their first ever World Cup. It’s the 105th minute and Kempes receives the ball on the edge of the Dutch box. He zig-zags through two covering defenders with footwork so fine it could have etched Argentina’s name onto the trophy itself. As Kempes bares down on the corner of the 6 yard box, Jongbloed comes charging out of his goal. The ball is poked goalwards, blocked, and a game of trophy defining pinball ensues. It takes an age to drop as the world holds its breath. With the will of the Monumental behind him, Kempes beats two opponents to it and pokes it over the line, stamping his name into history forever. Argentine go on to add another and the Jules Rimet is theirs.

Rarely has one goal saw one man so loved and hated at the same time, but Maradona’s first in one of the world’s most famous football matches ever achieved exactly that. Tensions were already high going into the 1986 quarter-final, with the scars of recent military conflict between the two nations still raw and what was about to proceed etched Argentina’s diminutive number 10 into the history books forever.

Six minutes into the second half, with the scores locked at 0-0, Maradona picked up the ball just inside the England half. The pint-size attacker drove straight through the middle of the England midfield, looking to cause chaos with another weaving run. He looked to play a one-two with Jorge Valdano, but Steve Hodge got a foot in as homes around England breathed easy as the ball looped up into the air towards 6ft 1 Peter Shilton.

Mere seconds later, the ball is in the net and the Estadio Azteca goes berserk. Maradona wheels away; the coolest man in the stadium despite being fully aware he has leapt into the air and knocked the ball into the unguarded net with his hand, in a manner so fine it takes the English commentator of the match three replays to realise what has happened. That goal put Argentina 1-0 up, but Diego was far from done there.

“Thank you God.  For football, for Maradona, for these tears, for this. Argentina 2, England 0.” – Victor Hugo Morales, match commentator.

A footballer’s career, with luck, is defined by one, or maybe two, defining moments, so for Maradona to record two in the same match is quite the feat. For all the controversy surrounding his first, his second can only be applauded; the goal of the century.

Diego Maradona played 582 matches for club and country, but the sheer talent of the man can be summed up in this one, singular moment. Though he claimed the first goal was with the work of God, it was his second that was far more fitting of the tag; the finest act ever to be seen on a football pitch.

In a mere 10 seconds, Maradona carved the entire English team open with surgical precision. Starting inside his own half, he charged forward, leaving man after man in his wake, picking up speed at a frightening rate as the roar of the crowd grew louder. Beardsley, Reid, Butcher, Fenwick and Shilton could only stand on and watch, their efforts in vain; Diego was writing his script and one which would be read for eternity; as he finished the devastating run off by stabbing the ball into the net and English hearts.

“Perhaps the most divine moment that I’ve lived was returning with Jorge Valdano to the midfield, with Jorge embracing me, looking into my eyes and saying. Now, yes, we’re champions of the world.” Jorge Burruchaga.

You’ve got to feel for Jorge Burruchaga. Scoring a winning goal with just 6 minutes left to play in the planet’s biggest game would in normal circumstances gain you everlasting worldwide acclaim but in many aspects it’s Maradona who takes all the glory for Argentina’s second world crown.

Nonetheless, Burruchaga will forever be remembered back home for one of the sweetest moments in Argentine footballing history, in what was one of the greatest finals ever in front of an 115,000 person crowd.

Having blown a two goal lead and with the crowd against them, Argentina were in big trouble. The tide of the game was with West Germany and if anyone was to go on and win it; it was them.

In the build-up to the goal you can clearly see the frustration of those in light blue as they struggle to settle on the ball. Everything changes, however, when the ball lands at the feet of talisman Maradona and with one flick of the boot, he unlocks the gates of World Cup heaven for Burruchaga to bear down on.

The Nantes forward has complete freedom of the Azteca turf and sprints through on goal, reminiscent of a cheetah chasing its prey; German defenders chasing dust and barely getting so much of a glimpse of his heels. The coolest man in the most incinerating of situations, Burruchaga pokes the ball beyond Schumacher and into the net, launching his nation to glory once again in the process.

“You’ve been crying since Italy till’ today”. Part of an Argentina song sung in games against Brazil.

It wasn’t in a final, or even a semi-final. It wasn’t part of a winning campaign. It wasn’t scored by one of the world’s greatest ever players; but ask any Argentine that was around at the time about the goal they’ve celebrated the most passionately and the overwhelming majority will cite Claudio Caniggia’s strike against arch rivals Brazil back in 1990.

Quite how Argentina were still in the game with 10 minutes left to run remains a mystery. They had been pinned back under wave after wave of Brazilian attack and only an outstanding performance from goalkeeper Sergio Goycochea had things level with time running out.

With it seeming for all the world that Brazil would find a late winner, Argentina launched a rare surge forward, spearheaded by Maradona, who carried the ball from the halfway line into the final third with a trademark run.

Such was the prowess of the man running at them, all four Brazilian defenders shifted towards the ball and Caniggia peeled away, completely open if Maradona could squeeze the ball through. Maradona being Maradona; the pass was perfect, and the rest is history.

Caniggia skipped around the goalkeeper and knocked the ball into the gaping goal, sending the country into complete pandemonium and claiming a victory that is still talked about to this day.