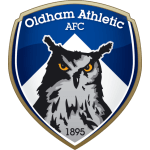 Too much Championship class from Bournemouth

Oldham have shown glimpses of being a really good side in the league this season but their inconsistent results have let them down with eight wins and ten losses leaving them firmly in midtable. When they have performed though, they’ve done very well with the likes of Conor McAleny and Zac Dearnley finding the net with regularity.

Bournemouth are currently third in the Championship but if they win their game in hand they will jump into the automatic promotion places as they look to regain their Premier League status at the first attempt. They’ve tasted defeat just three times this season and have shown their class on multiple occasions.

Oldham will look to give a good showing for themselves and we think they will trouble Bournemouth enough to get themselves on the scoresheet. Bournemouth have plenty of class in their front line though and we’re predicting that both teams will score in this match.

The talent at Bournemouth’s disposal should be too much for the League Two side however and, although Oldham will leave the game proud of their performance, we can’t see them progressing to the next round. We’re predicting a 3-1 win for Bournemouth this weekend, a result that will see them reach the fourth round of the FA Cup once again.