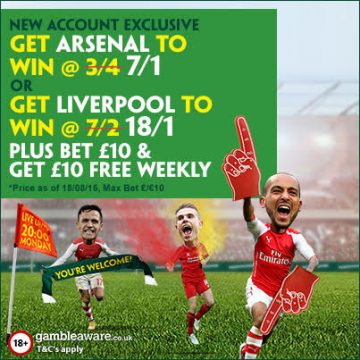 Arsenal had a rough start to the Premier League season. They came into the campaign among the frontrunners to challenge for the title after their Community Shield victory. But a 2-0 loss at home to West Ham had the fans anxious once again.

They managed to get back on track the weekend after when they beat Crystal Palace 2-1, with Olivier Giroud getting The Gunners’ first goal of the Premier League season.

But the calamitous defending on show against West Ham won’t be forgotten quickly, as the lack of organisation and composure showed by Petr Cech and all of the back line is certainly a worry.

Liverpool have managed to keep clean sheets in both of their first 2 Premier League games, with unconvincing 1-0 victories against Stoke and Bournemouth giving them 6 points.

However, their back to back wins makes it 8 matches without defeat for Brendan Rodgers’ side, with 7 of those games ending in victory for Liverpool.

Both teams have been somewhat unconvincing so far this season, but they will know that a win against a top club would send their confidence through the roof and spur them on in the coming weeks.

Despite the relative low scoring starts these teams have had this season, history suggests that this will be a cracker of a match.

The past 6 fixtures have seen a combined total of 24 goals scored, with 5 of the 6 matches ending with over 2.5 goals and both teams getting on the scoresheet.

This makes odds of 5/4 for Over 2.5 Goals and Both Teams to Score look very attractive indeed, and that’s what I’m lumping for on Monday night.

I do think a trip to the Emirates will be a tough game for Liverpool, so I’m backing Arsenal to win 3-1 at odds of 14/1, which I think are excellent value.