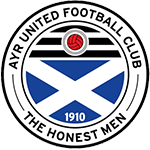 Ayr vs Dundee United predictions for Friday’s Scottish Championship fixture at Somerset Park. Two teams challenging for the title will go head-to-head in what should be a lively encounter. Continue reading below for all our free tips and predictions.

They may be in a rather flattering league position; just two points off top spot and six ahead of Queen of the South, who currently occupy fourth place,but Ayr don’t come into this fixture in good form. Friday’s hosts have failed to win any of their last six matches in all competitions, while they’ve lost their last three. Facing one of their chief promotion rivals, who just so happen to be coming here off the back of a big win, in such form is far from ideal.

Prior to the start of the new year, Ayr were ticking along very nicely indeed. They were dominating opponents, in terms of territory, chances created – Ayr bettered their opponents in terms of expected goals in each of their four games between the end of November and the start of 2019 – and were ultimately tough to beat. They’ve not been battered since the turn of the year, far from it, but they’ve lost two league games on the bounce and have been bettered in terms of creativity on both occasions.

The fact Ian McCall’s men have scored just once in their last four league matches is a tad worrying, though they’ve only dipped below 1.0 expected goals for in one of those four, so perhaps they’ve been unlucky. Fortunately, Ayr have an excellent scoring record on their own patch, as they’ve notched 19 goals in nine home games this season, while they’re currently averaging a very pleasing 1.9 expected goals for. Such numbers tell us that Friday’s hosts have few attacking problems at Somerset Park.

Unlike the hosts, Dundee United have not been overly fluent in the final third when playing away from the comforts of home. However, that’s not to say that they’ve been poor. The visitors are yet to return from an away match without scoring, though they’ve rarely gone mad in terms of goals scored. In fact, Robbie Neilson’s men have only scored more than in three of their nine travelling matches during the current campaign, while they’re yet to notch more than twice. Moreover, their average of 1.1 expected goals for tells us that they’re not exactly blowing teams away. This number may also have something to do with the fact that Dundee United are now without a win in three on the road.

From a defensive point of view, there’s not too much between what Ayr have done at home and what the visitors have done on the road. Ayr have conceded an average 0.89 goals on their own patch, while Dundee United have also conceded an average of 0.89 on the road. It is the visitors who boast the slightly better expected-goals against figures, though the hosts seemingly offer lots more going the other way. With Ayr currently averaging two goals and 1.9 expected goals for at Somerset Park, against a side that are averaging 1.22 goals and just 1.1 expected goals for on the road, they’re the team to side with at the prices. Backing the hosts to put their extra forward quality to good use is the way to go ahead of this clash.