Both Barnsley and Everton failed to get a goal this weekend, but both will be hoping to get a victory to progress in the Capital One Cup.

Barnsley hosted Bradford City in League One on Saturday, and failed to improve on their 2 match winning streak in the league.

This takes their tally in the league to 7 points after 4 games, putting them in a mid-tabled 10th position in League One.

They didn’t have an easy route to the 2nd round of the Cup either. They had to make a tip to fellow League One side Scunthorpe, with the matching ending 1-1 and Barnsley winning on penalties.

Everton haven’t exactly had a dream start to their Premier League season either. They began with a 2-2 draw against the newly promoted Watford.

They got an impressive victory last weekend though when they travelled to Southampton and came away with a 3-0 victory against a disappointing looking Southampton. Manchester City eventually ploughed through their defence on Sunday though, leaving Everton with 4 points from their first 3 games.

The last time these sides met was all the way back in 1998, when Barnsley were enjoying a rare spell in the Premier League. So the fact that Everton won 1 and drew 1 against Barnsley is a fairly insignificant statistic.

Considering the huge gulf in quality between these sides at the moment, the odds for an Everton win look pretty valuable at 4/7. It is possible that Roberto Martinez will put out a second string squad on Wednesday, but it is expected that there to be a few first team players in the starting 11 for this trip.

Considering this, backing an Everton win will likely yield a decent profit, and a correct score prediction 2-0 at 13/2 also looks good value. 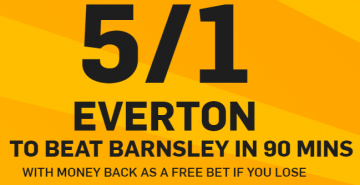