Bournemouth, the Championship’s top scorers last season, had struggled to find the net in their opening 2 Premier League fixtures. But last weekend they slayed that demon in dramatic fashion, beating West Ham 4-3 away from home.

They went 2-0 up in the first half through a Callum Wilson double, before West Ham brought it back in the second half. Marc Pugh netted to put Bournemouth back in the lead before Wilson completed his hat trick. Maiga got a late goal for West Ham but the newly promoted side held on for their first win of the season.

This was much needed for Bournemouth, and now they have got past their mental block of scoring in the Premier League they could push on to do better things.

They followed this up with a midweek battering of Hartlepool in the Capital One Cup, winning 4-0 in the 2nd round thanks to goals from Yann Kermogant, Dan Gosling, and a couple from Junior Stanislas.

Leicester have been a class above this season, picking up 7 points from their first 3 Premier League games and being one of the most impressive sides in the league.

They dismantled Sunderland with a 4-2 victory on the opening day of the season, following it up with a 2-1 win over West Ham and a draw away to Spurs last weekend.

Riyad Mahrez and Marc Albrighton have been the shining stars for them, with both of them exceeding all expectations and performing excellently in each match.

But even without them present, they still managed to destroy Bury 4-1 in the Capital One Cup in midweek. A hat trick from Joseph Dodoo was the standout performance, with Andrej Kramaric also getting on the scoresheet and Gokhan Inler making his debut.

These 2 sides met in the Championship a few seasons ago, with Leicester coming out on top in both games on their way to promotion. I think they will come out on top again, and with both sides enjoying high scoring games recently, I think that odds of 9/2 are incredibly good value for a Leicester Win and Over 2.5 Goals. 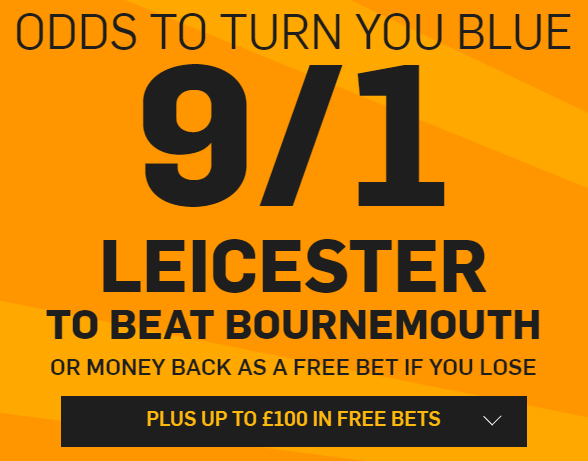