Fancy Sunderland to score? Get them at a MASSIVE 4/1 TO SCORE A GOAL! Click to claim!

After a poor opening two games in their first Premier League campaign, Bournemouth finally seem to have found some belief.

It all started with an incredible 4-3 victory over West Ham at Upton Park, which saw them end their goalless start to the Premier League in emphatic fashion.

Since then, they have scored in each of their three games in all competitions, with a 4-0 victory over Hartlepool, a 1-1 draw against Leicester, and a 3-1 defeat to the impressive Norwich.

This does leave their points tally rather low at four points from a possible 15, but they are heading in the right direction and will be confident that they can get a result at home to Sunderland.

But the fact that their record signing Tyrone Mings was taken off just six minutes into his debut with a knee injury that will keep him out for the season is a blow to them. He will join Harry Arter, Max Gradel, and Charlie Daniels on the bench for this one.

Sunderland could be without Steven Fletcher, and will definitely be without Adam Matthews and Adam Johnson.

Sunderland also started the season poorly. Well, poorly is an understatement, they were by far the worst team for the opening couple of weeks.

They lost last weekend at Spurs, and despite their slight improvement there is definitely a lot of work needed if they are to avoid relegation.

Sunderland have scored in five out of their six competitive games this season, with the only time they failed to net being in the drab match against Spurs on Sunday. Bournemouth, after failing to find the back of the net in their opening two games, have scored in all of their four since then.

This instantly points me towards the Both Teams to Score market, and at odds of 5/6 for them both to net look like really good value to me. 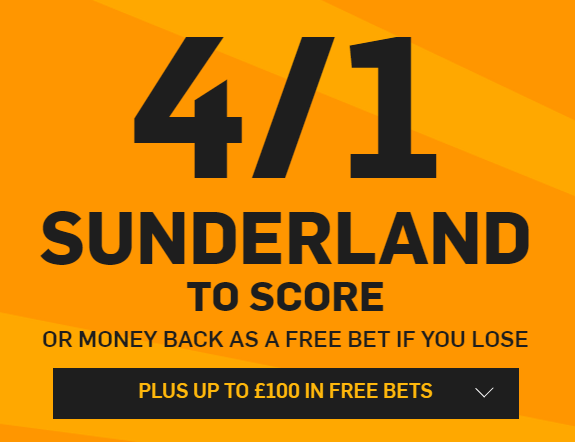