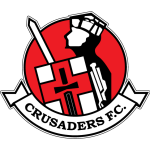 Coleraine vs Crusaders predictions for Saturday’s League Cup Final. Just a point separates these two sides in the Northern Irish Premiership table and there last couple of encounters have been closely fought, so we are expecting a tight and tense League Cup Final between the pair this weekend. Read on for all our free predictions and betting tips.

Reason For Coleraine vs Crusaders Predictions

Coleraine head into Saturday’s League Cup Final on the back of a 1-0 away win against Gelntoran which saw the club keep a clean sheet for the fourth successive match, while Crusaders lost 2-1 away at Gelnavon and that allowed Coleraine to leapfrog them in the Premiership table.

Like many cup finals, we are expecting a tight and tense affair on Saturday, as neither team are going to want to make the first mistake when there is silverware on the line, especially as four of the last seven encounters between the two clubs have produced under 2.5 goals. Coleraine edge the form guide with five wins and one defeat from their last six matches, but Crusaders aren’t far behind having won four and lost two of their last six competitive and non-competitive matches.

The recent performances of Coleraine suggest that Saturday’s final could well be won by the games first goal as the Bannsiders have kept clean sheets in their last four outings, two of which have ended 1-0. The final will be played at Windsor Park, the home of the Northern Ireland national team and the league leaders Linfield, so we believe it is prudent to take a look at both teams away records so far this season.

Coleraine have won 8 of their fourteen away games in the Premiership while Crusaders have only won seven times on the road, but there is very little between the teams in terms of their average points earned per away game with Coleraine picking up 1.93 points and Crusaders averaging 1.86 points, both well above the league average of 1.27 points.

Coleraine have a better away record of the two clubs

Four of Coleraine’s wins this season have been obtained via a 1-goal margin while a majority of Crusaders’s defeats (3) have also had a 1-goal margin, which ties in perfectly with our prediction for a 1-0 win for Coleraine. Both teams have kept clean sheets in 43% of their away games and don’t concede many goals on the road, another reason we are expecting a close and competitive ninety minutes between the pair on Saturday.

We’re confident that Saturday’s League Cup Final will produce under 2.5 goals and we have predicted a final scoreline of 1-0 in favour of Coleraine. Both teams are playing well and have performed to a similar standard in the Premiership this season which is why we are expecting a tight and tense ninety minutes. However, Coleraine have won more away games this season and for this reason, we believe the best bet is to back the Bannsiders to win 1-0.