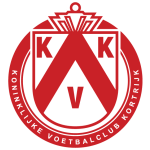 Gent vs Kortrijk predictions ahead of this clash in the Belgian top-flight on Saturday. Can the hosts get over the loss of their star man? Read on for our free betting tips and predictions.

Reason For Gent vs Kortrijk Predictions

Gent suffered a blow in their return to action, losing 2-1 at Sint-Truiden last weekend. They have taken another hit this week with Canadian forward Jonathan David heading to Lille. However, it doesn’t seem like their problems are up front right now.

The hosts have seen both teams score in each of their last six matches at home in the league. Gent have kept just one clean sheet in their last 10 top-flight games, while they meet a Kortrijk side who have scored in five of their last six trips.

With Gent starting with a 2-1 loss, we think their defensive issues will strike again here. We’re backing both teams to score, with the hosts averaging two goals per game in their last six meetings with this weekend’s opponents. As a result, we’re backing a 2-1 victory for Gent his weekend.