After being granted a licence to compete in the European Championships in 2013, Gibraltar set about their first qualifying campaign for Euro 2016. It has gone entirely as we expected.

They have managed one goal in their six matches, conceding an incredible 34 goals and losing every match by a large margin.

They have been handed three 7-0 defeats, one of which was at the hands of the Republic of Ireland, and their best result so far is a 3-0 defeat at home to Georgia.

Unsurprisingly, this leaves them rock bottom of Group D with zero points. Republic of Ireland, on the other hand, are still in with a chance of qualifying for the Euro 2016 Finals.

They sit in fourth position with nine points from their opening six games. They are only two points adrift of Scotland in the playoff position and four points behind Germany.

They will be expecting a comfortable win against Gibraltar, and with Germany and Poland playing at the same time it could turn into a tight race between four teams for qualification.

But Ireland aren’t in the greatest spell of form. After winning their opening two games and then securing a draw away to Germany, they have now only won one of their last six games (including friendlies).

Competitively, they lost 1-0 away to Scotland and have since secured two draws against Group D leaders Poland and in the return match against Scotland.

Obviously the bookies are expecting a thrashing for Gibraltar, and so are we. I think odds of 6/4 for a Republic of Ireland -5 Handicap Win are actually pretty good value considering they have conceded an average of 6 goals per game in this qualification campaign.

I think another 7-0 victory is on the cards for the Republic of Ireland, who will be looking for a big win to get their campaign going again after a series of draws. Odds of 17/2 for this scoreline look good value to me as well. 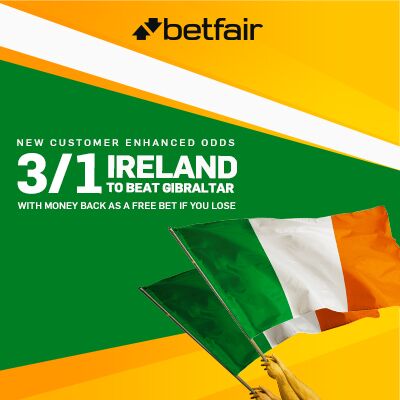