A 1-1 draw at Goodison Park was the final nail in the coffin for Brendan Rodgers. Shortly after the game he was dismissed, and during the international break former Borussia Dortmund sensation Jurgen Klopp was brought in.

He started his Liverpool career with a goalless draw against Tottenham Hotspurs. Despite the fairly lacklustre performance, it seems that Klopp has instilled a sense of work rate and pressure into his players.

Liverpool covered more ground than in any game under Rodgers in that draw against Spurs, and their high pressing style stopped the home side exposing their defence with any regularity.

Their draw at home to Rubin Kazan didn’t have many advantages. They did have a huge number of shots on goal, but their lack of clinical nature in front of goal was very disappointing for the home fans.

This leaves them without a win in four matches, and they have only won once in their last 11 games in all competitions.

This has seen them drop to 10th place in the Premier League table, whilst their opponents’ good form has seen them rise to 8th after a poor start to the season.

Southampton failed to win any of their first four Premier League fixtures, and simultaneously saw themselves eliminated in the Europa League playoffs against Midtjylland.

A 3-0 win against Norwich saw some confidence return to their playing style, but it was followed by a dismally boring 0-0 draw against West Brom. They impressed against Manchester United though, despite losing 3-2.

Since then they haven’t lost. They beat MK Dons, Swansea, and Chelsea before letting a two goal lead slip to the defiant Leicester last weekend and only going home with a point.

Southampton will be without Fraser Forster and Maarten Stekelenburg on Sunday, as well as Florin Gardos and Shane Long.

Liverpool’s injuries are really key to this game, and with Southampton in good form I think they can get something from Anfield on Sunday. Odds of 4/5 for a Southampton Win or Draw Double Chance look really good as well. 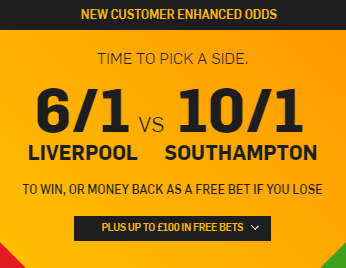