The side from the Potteries are one of a number of Premier League sides who’d be wise to take this competition seriously. Stoke are very unlikely to be involved in a relegation scrap but probably aren’t quite good enough to challenge the top six yet so a cup run could really make their season.

Changes are almost a certainty but they have a large squad now and there is certainly more quality in reserve this season and some of their 11 new signings will get the chance to impress here.

However with the likes of Charlie Adam, Shay Given and Peter Crouch all likely to come into the starting eleven, they also have an abundance of experience of nights like this to rely on and there could be a nice blend of youthful talent and wise old heads in the Stoke starting eleven at Kenilworth Road.

Xherdan Shaqiri, perhaps the most exciting signing in Stoke’s history is likely to start again as he needs games to get up to full match fitness after barely featuring in pre-season at his previous club. He created a goal on his debut at Spurs at the weekend and with players like him to call upon, Stoke should have far too much quality for Luton. Therefore odds of 13/8 for them to win by more than one goal seem extremely generous.

Luton have picked up just 2 points from their opening 4 matches in League 2 and may be more concerned with getting their league form up and running but did shock Bristol City in the last round of this competition on home soil.

They won’t fear Stoke and are likely to have a go buoyed by their showing against the West Country side. They’ve scored in all but one of their games so far but it’s defensively where their problems have mostly been.

Therefore if you’re looking for a correct score bet, backing Luton to get on the scoresheet but not get that close to Stoke might be the way to go. You can back the Premier League side to win 3-1 at good odds of 12/1. 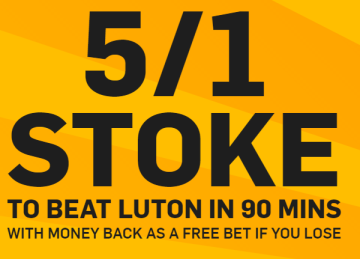