Malmo put in an impressive performance in Glasgow in midweek, despite their slow start to the evening.

They went 2 goals behind in the first 10 minutes to the Scottish champions, but sorted themselves out and managed to keep Celtic at bay for the remainder of the half.

They came out in the second half and got an early goal before conceding another. But Berget got what could prove to be a crucial goal in the 95th minute to end the game 3-2 down.

This was Malmo’s first loss since their 2-0 loss at Salzburg in the last round of Champions League qualifying. They overcame that first leg deficit, and beat them 3-0 at home the following week.

They are still in with a shout of getting to the top of the Swedish Allsvenskan as well. They are in 5th position after 20 games, but only 4 points separates them from league leaders IFK Goteborg.

Celtic aren’t top of their league either. 5 games have been played in the Scottish Premier League so far, and Celtic have picked up 13 points from these games.

The newly promoted Hearts are sitting at the top though having won all 5 of their opening league matches.

Despite Malmo having overturned their deficit against Salzburg, it isn’t looking too good for them as they go into this game. Celtic haven’t lost in any of their last 13 games, and have romped to victory in an impressive 11 of those.

I think this could be a very close game, and the bookies are obviously in agreement with me. Malmo are very slight favourites to win the match according to bet365, but I think the value is to be found in other markets.

Over 2.5 Goals is looking attractive at odds of 8/11, especially considering 4 of both teams last 5 matches have ended with 3 or more goals being scored. 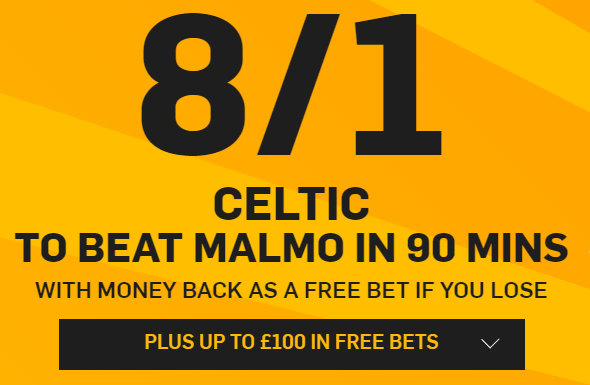