Scotland suffered an unexpected and shocking 1-0 defeat at the hands of Georgia on Friday. Scotland simply couldn’t get through the Georgian defence after the hosts took the lead in the first half.

They had a slight majority in possession, but didn’t make it count in the areas that mattered. They only had four shots on goal in the entire match and didn’t work the goalkeeper once.

This allowed Republic of Ireland to overtake them in Group D of the Euro 2016 qualifiers, and Gordon Strachan’s side now sit in 4th position.

They are one point behind the Republic of Ireland, but a loss against Germany on Monday could see that deficit increase as the Irish take on Georgia at home.

The Scottish visited Germany in their opening match of this qualification campaign, with the World Cup winners taking away a 2-1 victory.

Germany have been far from convincing during this qualification campaign though. Their 3-1 win against Poland on Friday was by no means a predetermined result, but did allow them to take the lead in the group for the first time.

It was an all Bayern Munich affair on Friday, with Mario Gotze getting two goals to add to Thomas Muller’s opener and Robert Lewandowski’s first half strike.

Poland can feel slightly hard done by at losing this match. They may have been short changed in possession, but they had more attempts on goal and perhaps should have scored more than one.

This leaves Germany leading Group D, but they only have a two point advantage over Poland so they definitely won’t be letting any complacency creep in at this vital stage.

It’s business time for the Germans now. Their 3-1 victory over Poland showed that they haven’t let the pressure of not being top effect them, and I think they’ll get the win over Scotland despite the hostile home crowd. I think a Germany -1 Asian Handicap Win at odds of 1.825 look like good value, and I’m also backing a 2-0 Germany win at 6/1.

If you don’t quite understand Asian Handicaps, take a look at our Asian Handicap Betting Guide to get a grips with one of the most profitable forms of football betting around! 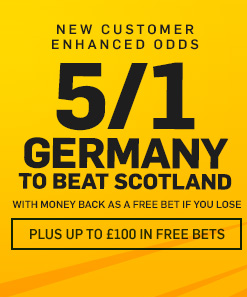