West Ham have secured two excellent results already this season, but marred them by losing to both Leicester and Bournemouth at home.

However, their opening day win over London rivals Arsenal won’t be forgotten in a hurry, and their 3-0 victory at Anfield before the international break saw a 40 year record broken as they won in Liverpool’s back yard for the first time since the 1960s.

Six points from their opening four games isn’t a bad return considering the opposition they have faced, but they will be disappointed to have lost to Bournemouth after being 2-0 up.

They are looking promising though. They managed to score three past Liverpool with the majority of their striking force out injured, and with a rumoured return of Andy Carroll to face his boyhood club they could definitely notch a few goals.

West Ham are actually the second highest scorers in the league, and only Manchester City have bettered their nine goals so far.

Newcastle haven’t been so successful in front of goal, and hold the joint lowest scoring record with an average of 0.5 goals per game.

This has definitely played a part in them failing to win any of their opening four games. They have had to play Manchester United, Swansea, Southampton, and Arsenal though, so two points could probably be considered a decent points tally.

Given West Ham’s excellent scoring record and the fact that old fan favourite Andy Carroll could be leading the line for the Hammers, I am expecting them to bag a few goals on Monday. Odds of 9/10 for Over 2.5 Goals look like really good value as well, although the suspension of Newcastle’s Alexandar Mitrovic will be a blow for them.

I think West Ham will get their first home league win of the season in this one too, and odds of 18/1 for a 3-1 West Ham win look worth a punt. 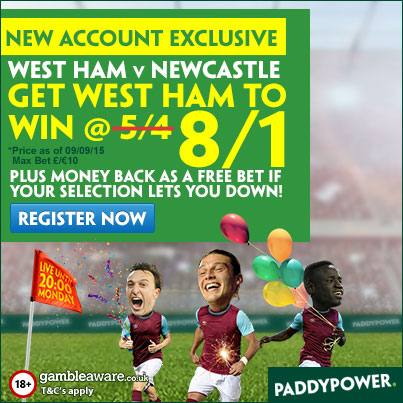