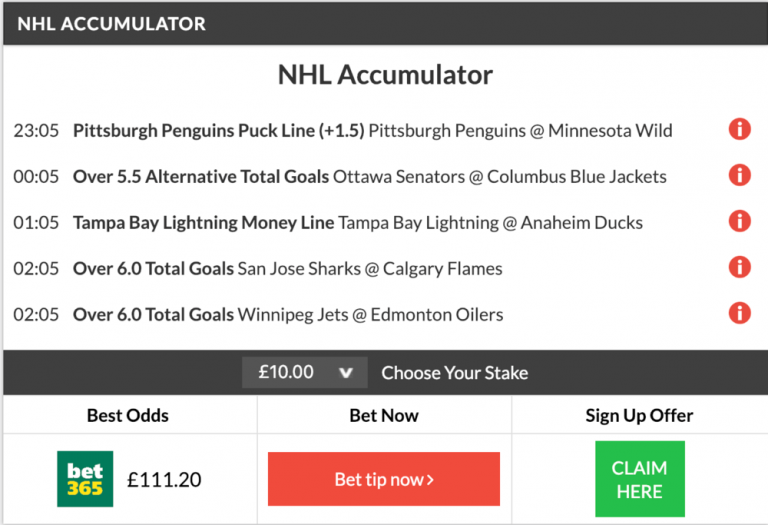 Our NHL Analyst has once again worked his magic and delivered yet another accumulator winner!

His 5-fold came in at a very solid 10/1 and to make things even better he also landed the NHL Double once again!

The Pittsburgh Penguins got us going with an upset win against the Minnesota Wild! Prior to the match we went with a safer +1.5 Puck Line option on Pittsburgh, but it wasn’t needed as the Penguins got the job done. They led 2-1 after the opening period and they doubled that lead to two in the 2nd period. Despite Minnesota trying their best to level the score in the final 20 mins, Pittsburgh managed to hold on to a 3-2 victory here!

Ottawa and Columbus clashed in the 2nd game of our Accumulator. We went for a Over 5.5 goals tip in this one and despite a slow start to the game (only two goals through the first 40 mins), we saw a real goal fest in the final 3rd of the game! 7 goals were scored and in the end Columbus came out on top 6-3, but more importantly we were 2/2 on our Acca!

It was a close game between the Tampa Bay Lightning and Anaheim Ducks in the 3rd game of the Acca. It finished 1-1 in regulation after both teams scored in the opening period, which meant we required overtime to settle the winner here. Tampa Bay didn’t waste time in the OT period as they scored within the first 35 seconds to get the win here and finish off December without dropping a single game!

The game between San Jose and Calgary saw a total of 13 goals scored, which doubled the amount we needed as we went for Over 6 Total Goals! Our bet had landed midway through the 2nd period which meant we were down to one last game on our acca!

It was a close one between Winnipeg and Edmonton, we also needed 6 goals in this one and the bet looked good after two periods with the score being 3-2 Jets. Edmonton levelled the score at 3-3 just 7 mins into the 3rd which was great for our bet as both teams would be looking for a winner after that goal. And they did, with Winnipeg managing to come out on top in the end. They scored with just under 6 mins remaining in the game, that got them the win in the end but more importantly it landed us our Accumulator!!

The NHL season continues in 2019 as well! Our FREE NHL TIPS page features Accumulators, Mega Accumulators, Doubles and Bet of the Day tips! They go live around 6 pm every single day!

Cheers lads! All the best pic.twitter.com/GuXmAGr2X5