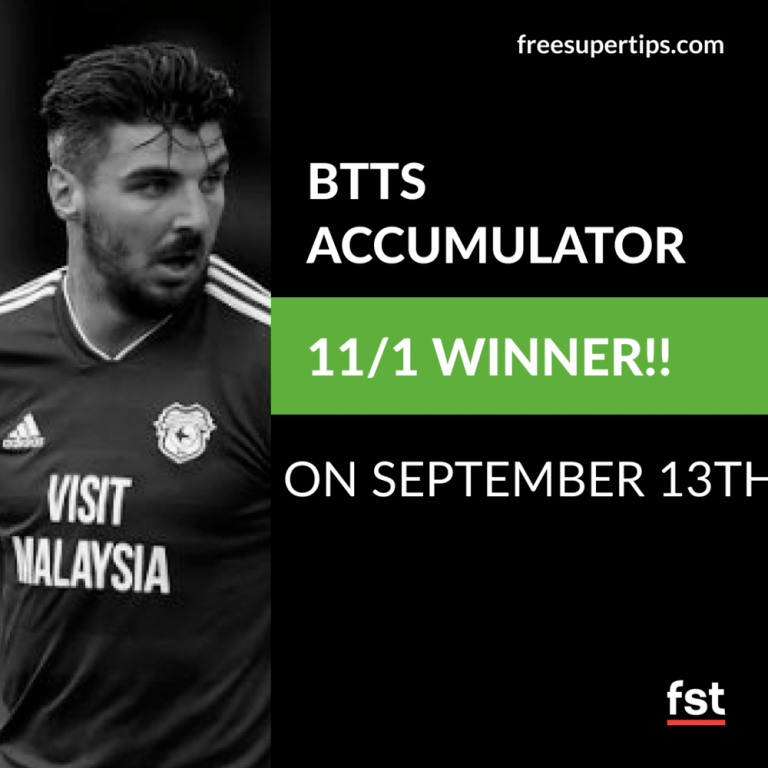 The football analysts already had reason to celebrate today as club football returned following the International break, but now they have even more reason to cheer! They have landed an 11/1 Both Teams to Score Accumulator on the first Friday back!

After landing a 10/1 Both Teams to Score Accumulator last Saturday, our experts have come up trumps once again! Here’s how it all went down:

WHAT A WAY TO START THE WEEKEND!!!

Our fivefold accumulator kicked off in the Scottish Championship where Arbroath took on Partick Thistle. The home side didn’t take long to get on the scoresheet as right-back Jason Thomson found the back of the net on 14 minutes, and that is the way the game stayed until half time. In the second half, Partick grabbed an equaliser through 39 year old ex-Rangers striker Kenny Miller. That is the way the game ended, and we were on to leg 2 of the accumulator.

Next up Fortuna Dusseldorf took on Wolfsburg in the German Bundesliga while Charleroi took on Genk in the Belgian Pro League. Giesselmann gave Dusseldorf an early lead over in Germany, before Weghorst levelled the scoring on the half hour mark, which is how the game ended, 1-1. Meanwhile over in Belgium, Charleroi took the lead on 26 minutes through a Morioka penalty on 26 minutes, before doubling their lead just 3 minutes later through Nicholson. It took until the 2nd half for Genk to grab a goal back, when Onuachu scored on the hour mark, but they couldn’t complete the comeback and the game ended 2-1.

Finally, we needed Both Teams to Score in Derby vs Cardiff and Amiens vs Lyon. It was an extremely lively start over at Pride Park, as Scott Malone found the opening goal on 6 minutes for Derby. That goal was cancelled out just 13 minutes later, as Robert Glatzel converted from the penalty spot. There were no further goals in the game as it ended 1-1. Over in France, it was a similar story. Amiens took an early lead through Jallet on 7 minutes, but their lead was short lived as Moussa Dembele leveled the scoring just 2 minutes later. He doubled his tally on 34 minutes, bringing the score to 2-1 to Lyon at half-time. If Lyon held on, we’d have also landed a 15/1 Both Teams to Score and Win Double, but unfortunately Amiens ruined the party by equalising in the 92nd minute through Bodmer. The game ended 2-2, landing the 11/1 Both Teams to Score Accumulator.