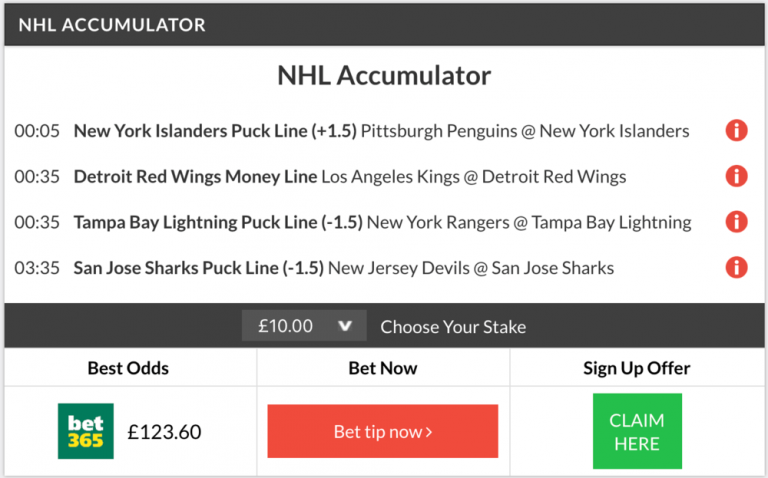 Just 10 days after our last NHL accumulator winner, our hockey analyst has delivered yet again!

We went for a more secure bet in the firs game of the Acca, which went to penalties between the NY Islanders and Pittsburgh Penguins. Our +1.5 Puck Line on the Islanders landed despite the Penguins coming out as winners after the shootout.

The Detroit Red Wings didn’t have any issues at home against the LA Kings. They went up 1-0 in the first period which they followed up with 2 more goals in the 2nd for a comfortable 3-0 lead. Despite conceding once in the final period they won the game without any issues in the end.

Despite a rocky start to our 3rd tip, the Tampa Bay Lightning managed to pull it off as they beat the NY Rangers 6-3 in the end. We were so convinced with Tampa winning here that we went with -1.5 puck line. The Rangers went up 2-1 after the first period, but Tampa responded with 5 goals over the next two to seal the deal.

And finally we needed the San Jose Sharks to win by 2 or more goals after we backed -1.5 Puck Line on them. Two identical scores in the first two periods meant that the Sharks were up 4-2 heading into the decisive period and they scored once more in that one to put the game away for good and won 5-2 in the end to land our acca!

We post our Hockey predictions every single afternoon on our FREE NHL TIPS page of the FST website! Remember to bookmark that page so you can be on the next winner!

Shoutout to our followers on twitter for sending in their betslips: