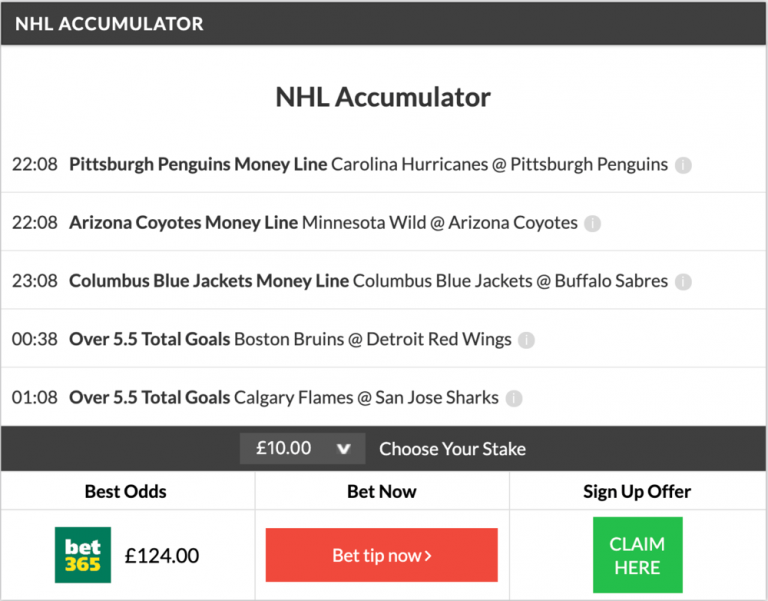 It was a perfect way to end the month of March here at FST as our tipsters have delivered yet another Accumulator winner!

Our Hockey tipster landed his 2nd Acca within the last 10 days as his 11/1 5-fold landed last night!

The Pittsburgh Penguins had very little problems against the Carolina Hurricanes at home last night. They opened the game up with a 2:0 lead in the first period and never looked back. The final score in this one was 3:1 to the home team and we ere off to a flying start!

The Arizona Coyotes dominated the Minnesota Wild at home. They won each period by a score of 1:0, 1:0 and 2:0 for a convincing 4:0 victory which gave them their 38th win of the season. We were 2/2 after this one on our Acca with 3 games to go!

We saw the same scoreline in the 3rd game as the Columbus Blue Jackets didn’t see much resistance in their 4:0 win over the Buffalo Sabres. It was 3:0 after the first 20 mins and Columbus added a 4th goal in the 2nd period to put the result beyond doubt.

Our two final bets were “Over 5.5 goals” in the Detroit vs Boston and San Jose vs Calgary games and both legs came in with ease! The Boston game saw 9 games scored with the Red Wings winning 6:3. San Jose lost at home against Calgary 5:3, but we weren’t too fussed about that as our bet landed with a total of 8 goals being scored here. And the Acca was IN!

Our followers were once again kind enough to send in their betslips on twitter: