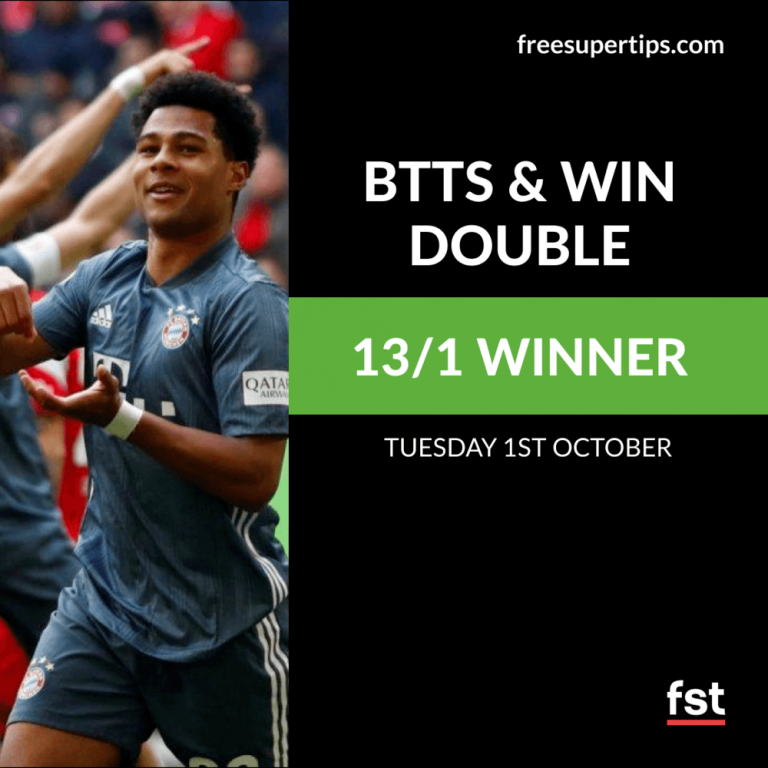 Things just keep getting better over at FST HQ! After landing two accumulators in two days over Sunday and Monday, our experts made it three in three days with a 13/1 BTTS & Win Double on Tuesday. Here’s how it went down:

Bayern with a dominant win over Spurs and Reading with a late consolation goal to land it for us! 😍

Our double started off in the Championship, as Reading took on Fulham at home. We needed Fulham to win this game, but with a goal from The Royals thrown in there too. A very strong start from the visitors saw us well on our way, but an early red card for Reading midfielder John Swift made things look a lot bleaker.

Meanwhile, in the Champions League, we needed the same to happen in the Spurs vs Bayern Munich game. We had backed the Germans to come out on top here and they couldn’t have reacted better after going 1-0 behind to a Heung-Min Son goal in the 12th minute. Goals from Kimmich and Lewandowski saw them 2-1 up going into half-time and no less than half an hour later the Bavarians were 4-1 up.

Back over in the Championship, things were looking a lot less promising. Fulham were also sitting on four goals scored, courtesy of two a piece from Cairney and Mitrovic, but Reading weren’t creating much at all. Down to 10-men, this looked like a lost cause… but an 88th minute goal from French forward Yakou Meite saw them steal a consolation and land our first leg!

And if leg two was ever in any doubt, former-Arsenal man Serge Gnabry was busy putting an end to that back at the Tottenham Hotspur Stadium. He scored four in what turned out to be a massive 7-2 win for Bayern Munich to land our second and final leg of our 13/1 Both Teams to Score & Win double!