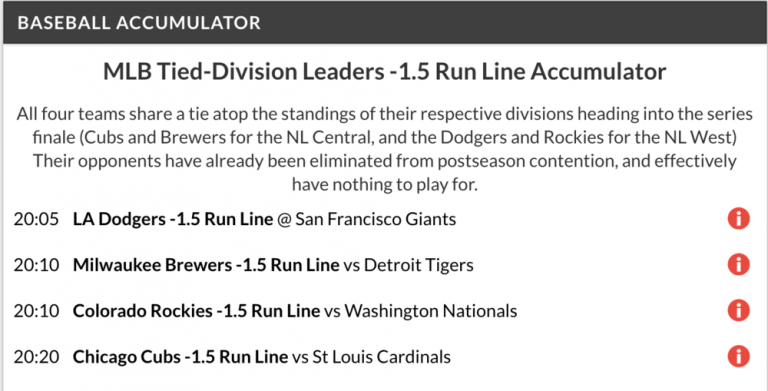 A spectacular way to end the month of September in the MLB last night!

Our Baseball analyst crushed it once again as he landed a 14/1 Accumulator + Double!

Neither of the four games were that close as our Acca came in with ease.

First it was the LA Dodgers who crushed the SF Giants 15:0. The game was only close for the first two innings, but then the Dodgers just went up a gear and won the 3rd by 7:0 which pushed their lead to 9:0 and there was no looking back from there.

A similar scenario unfolded in the 2nd game of the acca between the Rockies and Nationals. The Rockies came out on top 12:0 here in what was their 9th win in the last 10 games.

The Milwaukee Brewers won their game against the Detroit Tigers with ease as well. Although it was a close contest for much of the game, the Brewers dominated the 7th inning 6:0 and that was all she wrote. In the end it finished 11:0 to Milwaukee which was their 7th win in a row.

And finally the Chicago Cubs took care of business at home against the Cardinals. Despite falling down 2:0 early in the game, Chicago came back in the 3rd and 5th inning scoring a combined 8 runs during that stretch which gave them a big lead. They were able to hold on and record a 11:5 win, landing our Accumulator!

The regular season might be over, but there’s still a lot of baseball left to be played. We will have Accumulators and doubles in the Playoffs as well, so be sure to bookmark our Free Baseball Predictions page of the website!