14/1 Both Teams to Score accumulator lands on Sunday! 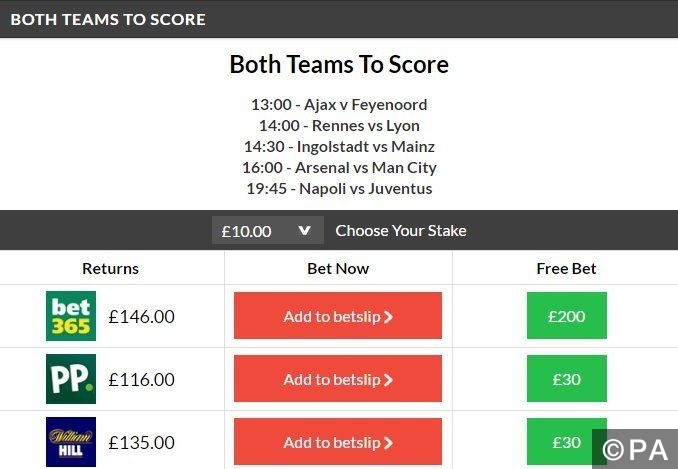 Cracking start to April for us here at FST! After successfully closing out March with 8 winning Accumulators in 14 days, we’ve managed to land another Footy Accumulator!

14/1 BOTH TEAMS TO SCORE accumulator wins!!

One more goal for our Over 2.5 Match Goal acca and evening acca!

Ajax and Feyenoord clashed in a much anticipated match for the first game of our Acca. It was a superb start to the game as the hosts opened the scoring in the 1st minute through Lasse Schoene who scored a cracking long range free kick.

The hosts doubled their lead in the 36th minute and all that was left for us to wait for was a Feyenoord goal. And boy did we wait! After wasting a few decent chances in the 2nd half, the consolation goal finally came to save the acca! We have Michiel Kramer to thank for scoring in the first minute of injury time to land the 1st leg of the acca!

At the same time, Rennes and Lyon were battling in the 2nd game of the acca. Rennes were dealt a huge blow early on as defender Ramy Bensebaini was sent off in the 5th minute after a handball in the penalty box. Although Lyon missed the penalty, they were in good shape after Rennes went down to 10 men.

We had to wait until the 53rd minute for the opening goal and it was Lyon who found the net first through Maxwel Cornet. Rennes didn’t give up though and it paid off as they were able to level the score despite playing with 10 men for 90% of the match. Ndombe scored a 82nd minute equalizer to give Rennes a much needed point at home.

Ingolstadt and Mainz were the 3rd leg of the acca. Two bottom of the table teams in the Bundesliga battling for valuable points, you just knew we were going to see goals in this one! It was Ingolstadt who drew first blood as they went ahead in the 10th minute. Mainz didn’t give up though and they were rewarded in the 2nd half as they leveled the score in the 70th minute taking us to 3/5 winning legs on the acca.

Up next it was the biggest game of the weekend in the Premier League with Arsenal hosting Manchester City, with both clubs looking to take advantage of Chelsea’s slip up earlier in the weekend. City got off to a hot start with Sane opening the scoring in the 5th minute after a well rounded solo effort.

In typical Arsenal fashion, the Gunners took control of possession after the goal and City had to rely on the counter for much of the 1st half. Theo Walcott grabbed a much needed equalizer in the 40th minute for Arsene Wengers men, landing the 4th tip on our Acca! Both teams went on to exchange goals after that and the game finished 2:2.

We were left with 1 final game on the acca and it was Napoli vs Juventus, arguably the most anticiapated game of the entire weekend.

Juve taking the lead in the 7th minute, with what turned out to be their only shot on target that night, meant that we were only a Napoli goal away from landing the acca. After conceding, Napoli took control of the game and created a number of huge chances, but just couldn’t find the net in the 1st half. They didn’t stop there and continued to pressure Juve and finally in the 60th minute it was Marek Hamšik who leveled things after a fantastic assist from Mertens!

To much of the delight of our followers, the Acca had landed and we could start celebrating yet another win!

Our Footy tips are posted daily and they usually go up on the website in the evening around 10 pm and are posted on the Football Tips page on our website!

Here are some of our followers’ betslips sent to us through twitter: