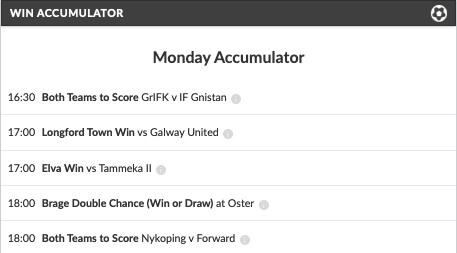 Although the club season may have ended that hasn’t stopped FST from bringing the winners. Following landing our 24/1 MLS Accumulator & 28/1 Finals Accumulator we have now landed our 3rd accumulator in 2 weeks with our 18/1 Monday Accumulator!

WHAT A WAY TO START THE WEEK 😍

Our accumulator got underway at the earlier time of 16:30 in the Finnish Kakkonen league where GrIFK hosted IF Gnistan, we needed both sides to score in order to get our accumulator off to a great start and thankfully the first leg got off to a great start. GrIFK opened the scoring in 3rd minute and the away side did not take long to equalise scoring in the 20th minute which got us off to the perfect start.

We had two games get underway at 17:00, firstly from the Republic of Ireland First Division. Longford sat third in the table having won 6 of their last 8 home league games and we needed them to once again pick up a home victory, likewise with our first leg the goal came earlier in the game with Longford scoring in the 11th minute before doubling their league in the 18th minute. A quick 7 minute double filled us with confidence and although Galway United got a consolation in the 55th minute it were not enough to prevent us moving onto our 3rd leg.

Our other 17:00 kick off needed another side who were strong at home to pick up their 10th victory in 12 home game against a side that had lost 4 of their last 6 away games. At half time the score sat at 1:1 which meant we needed a big second half from Elva, and just like Longford a 7 minute brace helped their performance with them scoring a goal in the 51st and 58th minute to go 3:1 up against Tammeka II. The away side despite pulling one back were unable to stop Elva from picking up a victory and keeping our accumulator alive.

Two legs remained and in one of those 4th placed Brage traveled to Oster hoping to get a win to push them closer to the top 3, we predicted travelling side would pick up a result and a 16th minute goal saw them lead up until the 72th minute when Oster got a vital goal to peg them back. There was only 18 minutes to go until full time and we just needed Brage to not lose but in the 76th minute they did one better going ahead again which would ultimately be the difference as a 90+5th minute goal was unable to prevent them picking up a result.

Our final leg just required both teams to score in the Sweden Division 1 where two sides battling relegation faced off. Forward got off to a stellar start with a 7th minute goal that meant we just needed one Nykoping goal in 83 minutes to land our 18/1 Monday Accumulator, as the game reached the 80th minute they were still unable to get the goal but then with 2 minutes remaining American striker Romero scored to get the goal we needed to land our accumulator!

Remember to bookmark our Free Football Predictions page of the website so you don’t miss out on any future winners! They go live each night around 10 pm for the following day.

Huge shoutout to our followers on Twitter for sending in their winning betslips:

Thanks for another win!! @FootySuperTips you guys are on 🔥 at the moment! #fst pic.twitter.com/aCuSd85gmx