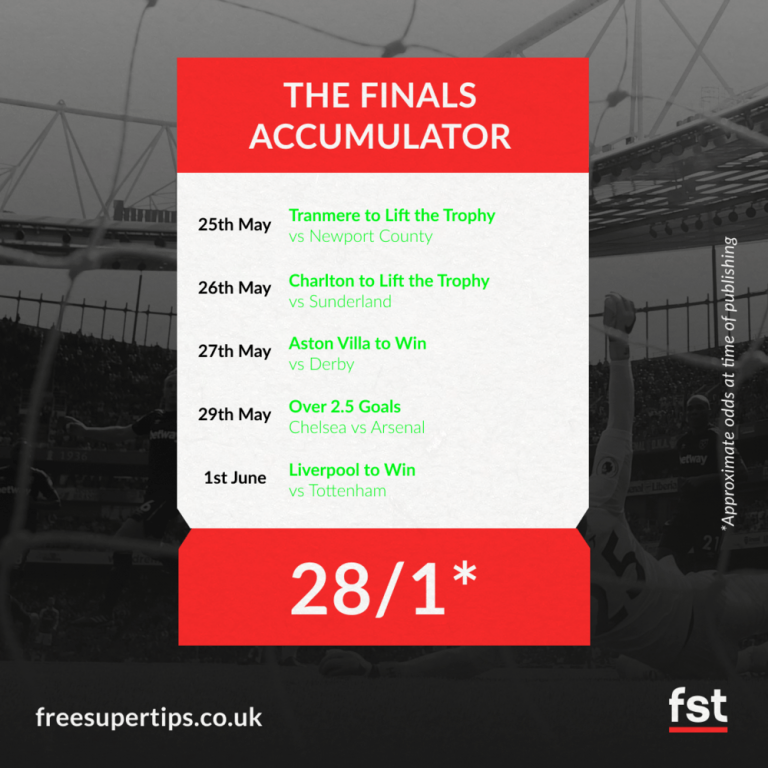 What an end to the football season – our analysts have gone and landed a 28/1 Finals accumulator!

Cracking way to finish the season off!!!!

The accumulator kicked off on 25th May, when Tranmere took on Newport County in the League 2 Play-Off final. This was the definition of a cagey affair, both teams seemed very nervous and it was certainly a nail-biter for the fans. After 90 minutes, the game went to extra-time and it was anyone’s game to grab. In the 119th minute, with the teams prepping for penalties, a looping was crossed into an unmarked Jennings – who headed the ball into the back of the net and sent Tranmere to League 1!

Less than 24 hours after, Charlton and Sunderland kicked off in the League 1 Play-Off final. Charlton started in the worst way possible, with Naby Sarr passing the ball past his goalkeeper into his own net in the 5th minute. The Addicks have had a great season, and were clearly not phased by going 1-0 down. In the 35th minute, Purrington equalised and the sides went into the break 1-1. A tense second half followed, and then we reached added time; in a moment that no footballing fan can help but smile at, a cross into the box followed by a scramble resulted in Charlton finding the back of the net through MOTM Patrick Bauer, who sent his side to the Championship in the 94th minute!

We then move onto the Championship Play-Off final, where John Terry met Frank Lampard as Villa took on Derby. From the outset, Villa looked the better side and were controlling the game – with Derby having chances on the counter attack. El Ghazi put Villa ahead on the brink of half-time, and this was followed up in the 59th minute when Josh McGinn made it 2-0! Derby then kicked into gear, and were having a number of close chances; in the 81st minute they finally made their breakthrough and resulted in a very nervy final 10 minutes. Aston Villa managed to hold on and will be playing in the Premier League next season!

With the Play-Off finals finished, the next final in our accumulator was the Europa League – where two English sides, Arsenal and Chelsea, travelled to Baku to face-off. This turned out to be a hugely one-sided affair, the first half was lacking drama – but then the second half delivered everything we’d hoped for. The floodgates opened once Giroud put the Blues ahead, by the 65th minute Chelsea led 3-0 and the trophy was firmly in their fingertips. A consolation goal from Alex Iwobi was cancelled out by Hazard’s second, and with there being more than 2 goals – our accumulator went onto the final leg!

The last leg of our accumulator was the biggest game in European football… the Champions League Final. Liverpool and Spurs battled it out in what was frankly a boring fixture, but did have its eventful moments. Within a minute, Sissoko had his arm high in the sky and gave away a penalty when Mane’s chip struck it. Salah dispatched it and the Reds were 1-0 up within the first 5 minutes! Liverpool gave Spurs a number of opportunities to equalise throughout the game, but they couldn’t find the back of the net. The game was settled in the 87th minute, when Divock Origi struck the ball into the bottom corner and sealed the deal for the Reds. Liverpool won the Champions League, and landed our 28/1 Finals Accumulator!

Remember to bookmark our Free Football Predictions page of the website so you don’t miss out on any future winners! They go live each night around 10 pm for the following day.

Huge shoutout to our followers on twitter for sending in their winning betslips:

Was on it with 20 thank you pic.twitter.com/zBpR67pssy