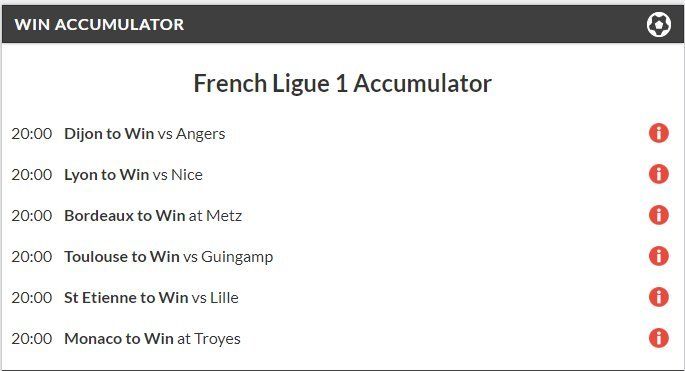 Congratulations to everyone who got on!

As it was the final day of the Ligue 1 campaign, all 10 games kicked off at the same time, all starting at 8pm.  We were looking for wins from 6 of those 10 games, namely Dijon to beat Angers, Lyon to beat Nice, Bordeaux to win away at Metz, Toulouse to beat Guingamp, St Etienne to beat Lille and Monaco to win away at Troyes.

We got underway with the perfect start, as Jonathan Bamba from St Etienne scored on 7 minutes, before Martin Braithwaite netted for Bordeaux to give us 2 sides in the lead inside 10 minutes. It wasn’t long before both sides were then 2-0 up, as Romain Hamouma and Malcom scored for Etienne and Bordeaux respectively.

However the dream start took a dent, when Alassane Plea scored for Nice away at Lyon, on 18 minutes, and that is how that game stayed until half time. Elsewhere, Dijon took the lead for us via an own goal, Rony Lopes bagged for Monaco to put them 1-0 up, whilst Hamouma and Kamano scored to put both Etienne and Bordeaux 3-0 up as we went into half time.

So at the half way stage, Dijon, Bordeaux, Monaco and St Etienne were leading, Toulouse were drawing and Lyon were trailing 1-0 to Nice.

The second half kicked off, and Depay wasted absolutely no time in making his mark for Lyon, netting in the 48th minute, before scoring his 2nd on 55 minutes to put Lyon 2-1 ahead, which is just what we needed. Meanwhile, Dijon were unfortunately pegged back by an Angers goal from Flavien Tait. We waited an hour for a single goal in the Toulouse game, then 3 came along all at once, with Max Gradel and Yaya Sanogo putting Toulouse 2-0 up, before Guingamp pegged one back through Grenier. That is how that game would end, at 2-1.

As we entered the final hour Hamouma completed his hattrick, before Lille scored an own goal to make it 5-0 to St Etienne, which is how that game ended. Shortly after that, Rony Lopes bagged his 2nd of the game for Monaco, while a goal from Julio Tavares gave Dijon the lead for the 2nd time in the game. The Dijon game would go on to end 2-1 to the good.

That left us just Bordeaux, who made it 4-0 through Nicolas de Preville to end their season in style, Monaco, who scored in the 93rd minute through Jordi Mboula to wrap up their win, and Lyon. Lyon’s game was slightly more tricky, as although Depay scored in the 86th minute via Depay to complete his hattrick, they were then pegged back immediately through another Plea goal. Fortunately, that was the way it ended, with Lyon coming out 3-2 winners, and so too the Ligue 1 accumulator landed!

The club Football season is reaching it’s end and we’ll be covering all the big games in the coming month before the World Cup begins! Make sure you take a look at our  Free Football Predictions so you don’t miss out any future winners!

Thank you to all those who sent in their winning betslips to us via twitter!

Well this has made my day forgot all about it was watching the fight great end to a disappoint man utd result cheers supertips pic.twitter.com/Nw47nb0IJg