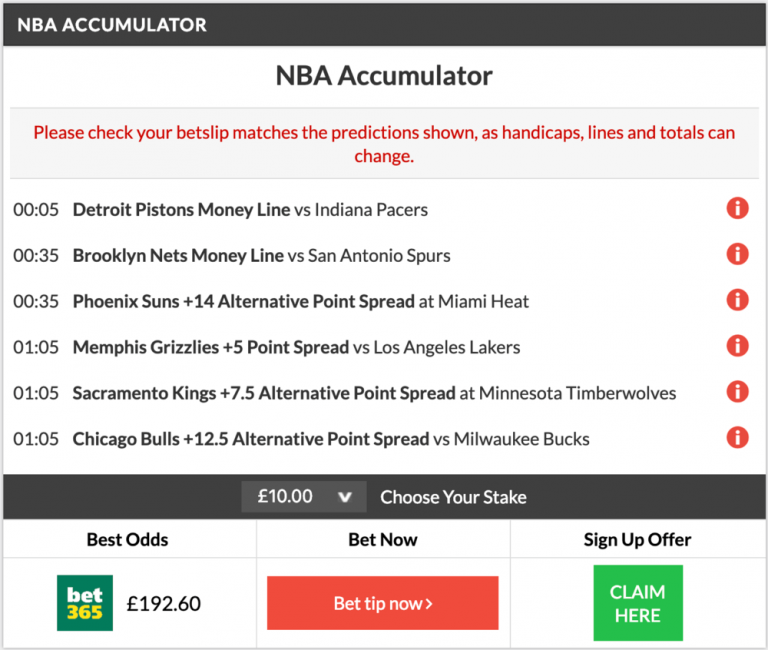 What a way to start the new week here at FST!

Following Sunday’s 15/1 Premier League Accumulator winner, this time around we have landed a winner in the NBA!

Last night’s Accumulator came in at a very solid 18/1 odds!

What a start to Tuesday!!

The Detroit Pistons got us off to a winner at home against the Indiana Pacers. A strong first quarter in which they led by 16, the Pacers tried to mount a comeback and were nearly successful. Luckily for us Detroit was able to hold on and won by 4 in the end!

The Brooklyn Nets rolled over the struggling San Antonio Spurs at home with a 16-point win. D. Russel led the way with 23 points for the home team which had every single player that played score for them in the game.

The Phoenix Suns celebrated an unlikely win at Miami, landing our +14 Point Spread with ease. All five starters scored in double figures for the Suns who have improved to 5-28 in away games this season.

Memphis put another dent into the playoff hopes of Lebron James and the Los Angeles Lakers as they beat them at home 110-105. We had +5 Point Spread on the Grizzlies here and they fully delivered. Mike Conley led the way with 30 points.

It was a close call in the Minnesota vs Sacramento game. We backed the Kings +7.5 point spread and with them losing 112-105 our bet landed by only half a point here. But a win is a win and we will take it! KAT scored 34 pts for the T’Wolves who have won their 20th home game of the season.

And finally we had the Bulls +12.5 Point Spread in the final game of the Acca against the high flying Milwaukee Bucks. Similarly to the Minnesota game, our tip landed just barely here as the Bucks won by 11 pts. It was Milwaukee’s 46th win at home, while Chicago lost it’s 45th on the season, but more importantly our Accumulator came in!!

Follow our FREE NBA TIPS page for even more winners! Tips usually go up on the website in the afternoon hours!

Didn't have all the markets on Betfair but the 18/1 came in. Lovely pic.twitter.com/y9NqsBKk2C