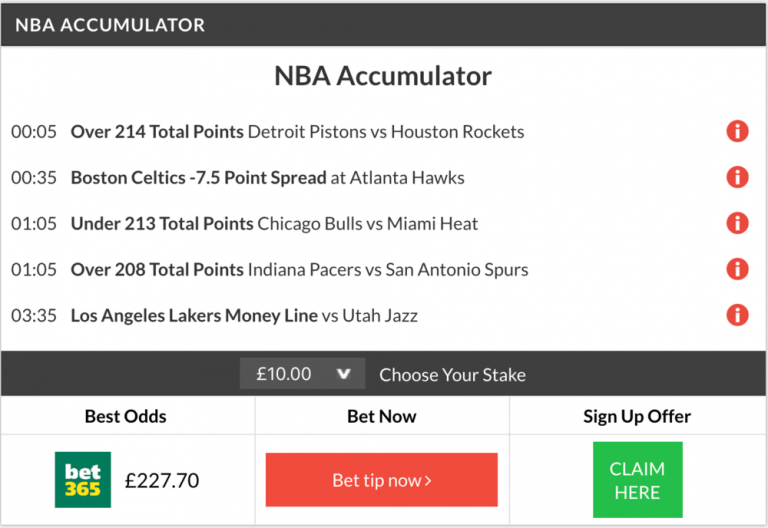 The past 7 days have been amazing here at FST!

We followed that with yet another accumulator winner last night as our Basketball Analyst worked his magic and delivered!

The NBA acca consisted of 5 games and was priced at a very solid 21/1 odds!

GET IN!!!!! WHAT A START TO SATURDAY!!!! pic.twitter.com/FSNuSeff5F

The night started off in Detroit where the Pistons hosted the red-hot Houston Rockets. Right off the bat, we needed overtime in this one for our bet to land. The game finished 98:98 and it was the Pistons who prevailed in OT 116-111 which was good enough to land our Over 214 Total Points bet! Blake Griffin was the hero in this one as he led the way with 28 points scored.

The surprisingly struggling Boston Celtics routed the Atlanta Hawks by 18 points in the 2nd game of our Acca. This was never really a contest as the Celtics jumped out to a 22-point lead after the 1st quarter and the win was never in doubt.

We expected a low scoring game between the Chicago Bulls and Miami Heat and that proved to be the case as the two teams failed to score over 200 points combined. Miami won 103-96 thanks to 27 points from Richardson. They are now back to .500 in road games this season.

San Antonio beat Indiana 111-100 in the 4th game of our Acca behind 33 pts from Aldridge. We opted for Over 208 pts in this one and the two teams delivered. The Spurs are also struggling a bit early on in the season as they are just 9-9 after 18 games played.

And finally the faith of the Acca was in the hands of the Los Angeles Lakers and LeBron James who hosted the Utah Jazz. It was a close game and the Lakers led by only 1 point heading into the final period, but they managed to pull it out thanks to 22 points from Lebron and 24 pts from Ingram winning their 3rd straight game and more importantly clinching yet another winning Acca for us!

We are just warming up in terms on NBA bets this season! November is almost over, but the basketball season lasts until June, so be sure to bookmark our FREE NBA TIPS page so you don’t miss out on any future winners!

Our followers were once again kind enough to send in their winning betslips to us through twitter:

Boom get in there you wee dancer pic.twitter.com/VqMraUSaQB