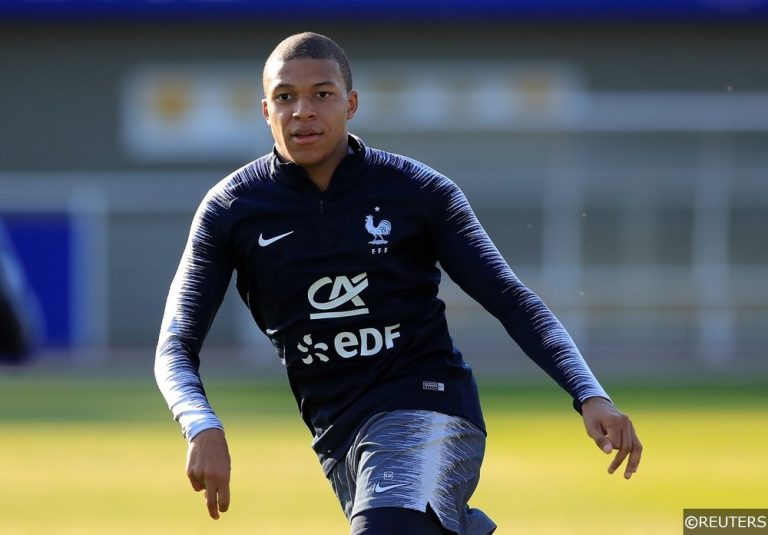 There will be 42 players in total aged 21 or under strutting their stuff at the 2018 World Cup in Russia. Some of those young-guns have already established themselves as important members of their respective teams, while others will be hoping to use the platform the World Cup provides to showcase their talents to an audience of millions.

In our “21 Under 21” feature, we’ll take a closer look at some of the young players hoping to make a big splash in Russia this summer.

Read More: Academy Analysis Group A: Which clubs produced the most players at World Cup 2018?

Despite struggling at times during his first season in the Premier League with relegated Stoke City, the signing of Ramadan Sobhi is something a coup for his new employers Huddersfield Town. Known as “Ramadona” in his homeland, Sobhi has an extensive bag of tricks at his disposal. The winger had been linked with moves to a number of more high-profile clubs before sealing his £5.7m transfer to the Terriers.

Drawing comparisons with his compatriot Luis Suarez, Maxi Gómez enjoyed a fabulous first season with Celta Vigo in Spain after moving there from Defensor Sporting last year. Gómez rattled home 17 goals in 35 La Liga appearances for the Célticos, earning rave reviews along the way. He is expected to be kept in reserve for Uruguay at the World Cup, but Gómez has the talent to make an impact when called upon.

Technically talented, creative midfielder Rodrigo Bentancur has been feeling his way into the first team picture at Juventus since moving to Turin from Boca Juniors last year. The precocious schemer has packed on 11lbs of muscle since joining Juve in a bid to become more first-team ready. Bentancur is expected to start for Uruguayan manager Óscar Tabárez in Russia.

Central midfielder Ezatolahi will miss Iran’s first Group game in Russia having been sent off in qualifying, though he was an ever present during Iran’s successful qualification campaign. The former Atletico Madrid academy prospect is the youngest footballer to have played in the Iranian Pro League, having made his debut in the competition as a 16-year old for Malavan in 2012.

The last time Morocco qualified for the World Cup, back in 1998, Achraf Hakimi hadn’t even been born. Hakimi has been at Real Madrid since 2006 and was drafted into the first team squad this season as Dani Carvajal’s understudy by former manager Zinedine Zidane. The flying fullback made 9 appearances in total for Los Blancos in 2017/18 scoring twice.

Fleet-footed winger Guedes enjoyed a breakout season on loan at Valencia in 2017/18, dazzling opponents and supporters with his close control and speedy play down the flanks. Guedes must decide now whether he wants to stay with parent club PSG or make a permanent move to Spain where his progress has been remarkable.

The youngest player at this summer’s World Cup, Daniel Arzani has been built up as the biggest thing to come out of Australia since Home & Away. The winger, who has forged a reputation for running at and beating fullbacks finished the season in dazzling form for Melbourne City.  He’s definitely one to keep an eye on.

Having burst on to the scene with 20 goals during his debut campaign for Ajax in 2016/17, Kasper Dolberg seemed to be suffering from “second season syndrome” for the Dutch giants in 2017/18. However, Dolberg’s talent is undeniable and he will hope to turn heads if and when he features for the Danes in Russia.

Nicknamed “Donatello” by his PSG team mates for his resemblance to the Teenage Mutant Ninja Turtle of the same name, Mbappé is the biggest name on our 21-man list. Officially still on loan at Paris St. Germain from rivals Monaco, the teenager is already one of the most exciting attackers in world football and his potential seems almost limitless. Mbappé will have a huge part to play for France at the World Cup.

The youngest player in the Croatian squad, Duje Ćaleta-Car is seen as a future international defensive lynchpin by those in the know. The athletic centre-half has been a regular in the Red Bull Salzburg defence since he was 18, displaying a maturity beyond his tender years. The former HNK Šibenik has been linked with a whole host of big European clubs already this summer.

Attacker Albert Guðmundsson is the bright young hope of Icelandic football and the youngest player in their World Cup squad by at least a couple of years. Interestingly, Guðmundsson’s great-grandfather was the first Icelandic professional footballer and both his parents played for their respective national teams too, so he’s definitely got some pedigree. Guðmundsson has been banging the goals in for PSV reserves this season.

Ball winner Wilfred Ndidi has been catching the eye at the base of Leicester City’s midfield for around 18 months now. The former Genk star’s combative style of play has proven a real hit in the Premier League since he moved there in January 2017. Ndidi made his senior debut for Nigeria back in 2015 against DR Congo.

Centre half Nikola Milenković is one of Serbia’s emerging talents and though he will most likely be handed a watching brief in Russia, the 20-year old is expected to force his way into the first team picture sooner rather than later. Milenković has been at Fiorentina since last year after La Viola paid in the region of €5.7m to prise him away from Partizan Belgrade. Milenković made his debut for the senior Serbia national team in 2016.

Dubbed the “Serbian Radamel Falcao”, explosive Benfica centre forward Luka Jović spent the 2017/18 season on loan at Eintracht Frankfurt in Germany. The loan deal runs for two years in its entirety and Frankfurt have an option to make the deal permanent. Jović was used sparingly last year by departing Frankfurt manager Niko Kovač, though he did net 8 goals in just 9 starts in the Bundesliga.

21- year old forward Breel Embolo carries the tag of most expensive Swiss player of all time having swapped Basel for Schalke 04 for €22.5m in 2016. Just a few months into his career in Germany, Embolo suffered a horrific injury that kept him out for an entire year. Embolo has been feeling his way back into form since, and started just 9 Bundesliga matches in the 2017/18 season.

Live wire defensive midfielder Denis Zakaria counts Patrick Vieira and Paul Pogba among his role models and you can certainly see elements of both their games in Zakaria’s. The former Servette junior enjoyed a positive first season in the Bundesliga with Borussia Monchengladbach in 2017/18, where he plays alongside 3 of his Swiss World Cup compatriots Nico Elvedi, Yann Sommer and Josip Drmić.

Known equally for his versatility and his penchant for taking risks at the back, Edson Álvarez is the youngest member of the Mexican World Cup squad. Álvarez made his senior debut for Mexico against Iceland in February 2017 having represented his country at Under 20 level before that. Álvarez is already a fan favourite at his club America, where his meaty challenges and committed displays haven’t gone unnoticed.

20-year old Lee Seung-woo made headlines in 2010 when he joined the famous La Masia academy at Barcelona at the age of 12. Lee progressed through the ranks at Barca, though he never made a first team appearance for Los Cules. In the summer of 2017, Lee joined Italian club Verona in Serie A, though Barcelona inserted a buy-back clause into the deal. Lee has been a star at underage level for South Korea, though has yet to make a discernible impact in the senior ranks.

Gifted central midfielder Youri Tielemans is considered the Golden Boy of Belgium’s Golden Generation. The Anderlecht academy graduate made the switch to Monaco in Ligue 1 last year and though he found the going tough to begin with, he finished the season strongly. Tielemans is almost certain to start from the bench at the World Cup, but he is a fabulous option to introduce at any time for Belgium.

Captain of the Poland U21 team, Dawid Kownacki is the heir apparent to Polish talisman Robert Lewandowski. Kownacki was prolific in his country’s junior teams from U15 level right the way through to senior level. His performances for Lech Poznan earned him a transfer and a 5-year contract with Sampdoria last summer, though Kownacki has yet to fully establish himself in Serie A. Kownacki started just 6 times in the league in 2017/18 and was introduced as a substitute 16 times.

Just about every top club in Europe is hot on the trail of Rennes winger Ismaïla Sarr. Sarr turned down a move to Barcelona last summer in favour of a switch to Rennes, valuing playing time over money at that point in his career. Sarr graduated from the same academy as Sadio Mane and his playing style has led people to draw comparisons with the Liverpool attacker.