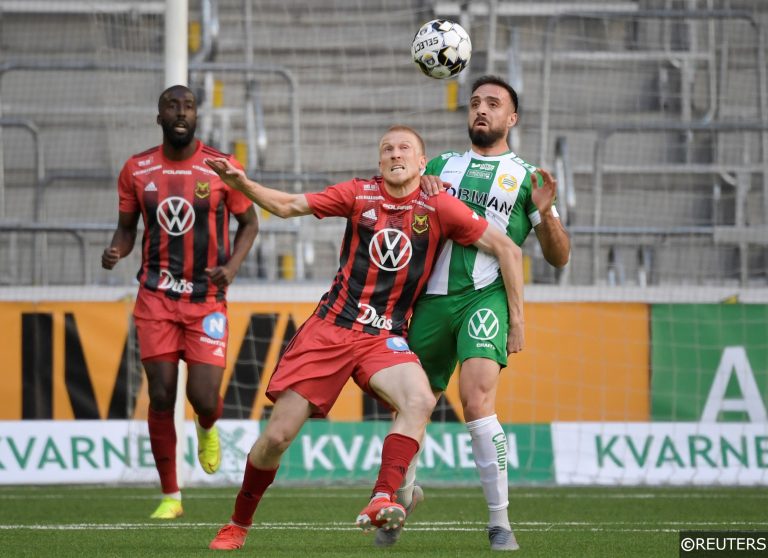 Our dedicated team of football analysts hit the mark with a bang yesterday, landing a superb 24/1 Swedish accumulator to close out the week in style!

The successful Thursday six-fold featured was filled out by spot on selections from the Allsvenskan, as our tipsters delivered more Swedish hits than a Best Of Abba album.

Read on to find out how the evening unfolded!

Some great action from Sweden tonight, we’ve got an acca for it!

All of yesterday evening’s matches shared a 18:00 kick-off time, which led to plenty of simultaneous drama unfolding in Scandinavia.

The first successful leg took just 38 minutes to land when Astrit Seljmani’s spot kick brought Varberg BoIS back into the game at home to BK Hacken. Seljmai’s converted penalty meant that both teams had registered in line with our prediction.

We also needed both teams to register in Sirius’ clash with Helsingborg and in Elfsborg’s tussle with vs Falkenbergs FF, and each game delivered with time to spare in the 69th and 49th minutes respectively.

Elsewhere, our tipsters big and brave, with THREE double chance predictions on a trio of away teams.

In one of those picks, Hammarby were tied at 1-1 in the dying embers of their match IFK Norrkoping before Abdullah Khalil broke clear to give the visitors a leg-securing 1-1 lead.

IFK Goteborg gave us more of a scare in their 1-1 draw at Kalmar FF, though the Blåvitt – who have won just twice all season – held on for a share of the spoils.

Finally, Ostersunds FK repaid our faith in them with a hard-fought 1-0 triumph at AIK in a fractious contest that saw both teams reduced to 10 men in the final throes.

We only needed Ostersunds to avoid defeat, though they settled our nerves nicely by grabbing three points.

Elsewhere, our US sport experts landed their second overnight MLB double in a row thanks to wins for Pittsburgh Pirates and Chicago Cubs. Check out our MLB predictions for their latest selections now!

Too nervous and cashed it lad. Cheers for the beers pic.twitter.com/jQ7sxaeRT7

you just won me this cheers pic.twitter.com/hS07GjPpME

Barcelona vs Bayern Munich: 5 key battles (plus player specials) that could decide the tie