The 2015-16 NHL season is about one-third of the way through as the schedule has hit mid-December. With that in mind, it’s given us plenty of time to get a look at new faces in new places, how coaching changes have affected the records of teams and who is already playing for next year. While the race for the #1 pick is hardly as enthralling a prize as it was last year with Connor McDavid and Jack Eichel at the top of the draft, someone will end up the winner, or loser depending how you look at it, in that particular event.

Teams are more focused on winning the Stanley Cup and being able to be the champions of the National Hockey League when the season comes to an end. There are several teams that have started to pull away from the pack as six teams have put up at least 38 points in the standings. Which teams are contenders to hoist Lord Stanley’s chalice and who are merely off to a hot start in the regular season that will fizzle once the playoffs begin? We’ll take a look at three of the teams that we think are the most viable contenders to win the Stanley Cup come June 2016.

Dallas has been the league’s hottest team to start the year as they entered Saturday’s action with a 22-5-2 record and 46 points. What is a bit off about the Stars season so far is that they’ve been white hot this season but two of their five losses in regulation have come at the hands of the Maple Leafs, who are a team in transition to say the least. Dallas has a pair of five game win streaks and a pair of three game streaks on their resume already this year.

The Stars have racked up a league leading 102 goals on the year: they average 3.5 goals per contest, which is the top mark in the league. It hasn’t seemed to matter where the Stars play so far this year as they have gone 11-3-0 at home and 11-2-2 on the road on the season. The Stars have gone 7-1-2 in their last 10 games entering Saturday night’s road contest at St. Louis. Dallas has been devastating on the power play as they are 2nd in the league as they score a goal with the man advantage 23.9 percent of the time.

One of the positives for Dallas is that they aren’t a one line team: 13 different players have posted at least 10 points on the year. The Stars have a pair of very good centers in Tyler Seguin (15 goals, 25 assists) and Jason Spezza (11 goals, nine assists) to anchor their top two scoring lines. Left wing Jamie Benn (20 goals, 20 assists) is the team’s leading goal scorer and tickles the twine on 22.7 percent of his shots on goal. Patrick Sharp (10 goals, 12 assists) is a solid second wing but he still needs to get fully adjusted to the Stars’ system. John Klingberg, who was a 5th round pick in 2010, has been a revelation with five goals and 25 assists on the blueline. With guys like Johnny Oduya, Jason Demers and Alex Goligoski, the Stars have a solid top four.

Washington has had a penchant for putting together solid regular season performances and then finding new, creative ways to blow big leads in playoff series. The Capitals are off to a blazing start this year as they are 20-6-2 after beating Tampa Bay 2-1 on the road Saturday and have 42 points to lead the Metropolitan Division. It’s a tough division to battle through with the Rangers, Penguins and the resurgent Islanders but Washington has the weapons to work with that can make them a threat.

The Capitals are playing terrific at both ends of the ice this season: they are 5th in the league scoring three goals a game and they are 4th in goals allowed per game as they give up 2.3 per contest. Washington, like Dallas, is blistering teams on the power play as they light the lamp on 23.9 percent of their man advantage opportunities. The Capitals are no slouch on the penalty kill as they are 7th in the league as they kill off 84 percent of their shorthanded opportunities. Washington has been extremely stingy when it comes to giving up goals as the Capitals have given up the second fewest goals in the league with 62.

Washington doesn’t have a lot of big names that jump off the page at the casual fan but Alexander Ovechkin is still on the team. The sniper has potted a team-high 14 goals to go along with 13 assists on the year to tie for the team lead with 27 points. Nicklas Backstrom and former St. Louis Blues sniper T.J. Oshie are key guys up front as well for Washington. The Capitals have gotten nice production from Evgeny Kuznetsov, Justin Williams and Jason Chimera. The blueline is anchored by John Carlson and Matt Niskanen with Karl Alzner and Nate Schmidt rounding out the top four. Washington would like Brooks Orpik to get healthy as he hasn’t played since November 10 with a lower body injury. Orpik would add the physicality element that the Capitals have lacked in the postseason in recent years.

Braden Holtby came into his own down the stretch last season and has continued his development this season. He’s gone 17-4-1 with a 1.95 GAA, .928 save percentage and one shutout in 22 appearances on the year. If he gets some rest down the stretch to be rested for the postseason, he could steal games, if not a series outright, with his stellar performance. 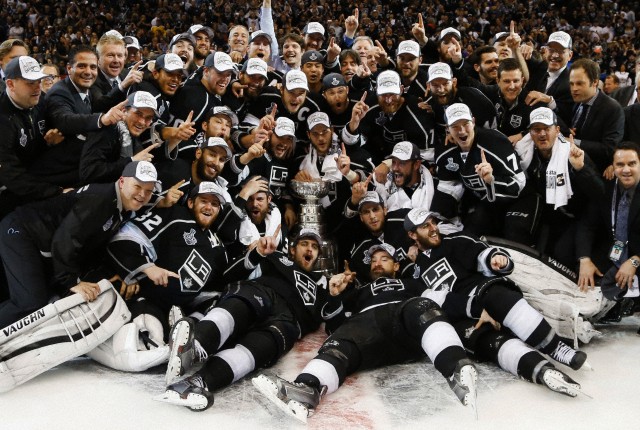 Los Angeles may have missed the postseason in 2014-15 but that was due to a slow start: they finished with 95 points and finished two points out of a postseason berth. They won the Stanley Cup in the 2013-14 season however and they have the leadership and ability to shut down any team on a regular basis. Los Angeles is the league’s stingiest team when it comes to the opposition lighting the lamp as they’ve allowed just 61 goals in 29 games this season. The Kings stand 19-8-2 with 40 points after falling 2-1 in overtime to the Sabres Saturday.

The Kings don’t score a ton of goals as they are currently 17th in the league with an average of 2.6 goals per game. They’ve scored only 75 goals but they hold a +14 goal differential on the season. The Kings give up the league’s fewest goals per game as teams score 2.1 per contest against Los Angeles. One of the big keys in the playoffs is killing off penalties: the Kings are 5th in the league in penalty killing as they prevent teams from scoring on 84.6 percent of their shorthanded situations. Jeff Carter is tied for the team lead with 11 goals and leads the team with 26 points on the season. Tyler Toffoli (11 goals, nine assists) and former Bruins winger Milan Lucic (10 goals, eight assists) are the only other players with double digit goals this season. Anze Kopitar needs to step up and play better than he has this season to help the Kings offensively but he’s still a +14 on the year. Dustin Brown is a better player than the two goals and seven assists he’s put up this season in 28 games. Marian Gaborik will likely bounce back as well after scoring five goals and four assists in 28 games so far.

Los Angeles has one of the best blue line groups in the league, led by All Star Drew Doughty. Guys like Jake Muzzin, Christian Ehrhoff, Alec Martinez, Brayden McNabb and Jamie McBain help make life easier for the Kings in the defensive end as that group can be rock solid in their own end while transitioning to create offensive opportunities. The Kings have depth in the system as well as guys like Matt Greene, Jeff Schultz and Derek Forbort can step up and fill in if one of the top six go down with an injury or needs a breather.

When it comes to having success, it starts between the pipes: the Kings have one of the top netminders in the entire league in Jonathan Quick. Quick has posted a 16-7-1 record with a 2.16 GAA, .920 save percentage and one shutout in 24 games. Jhonas Enroth has sparkled as the backup goalie as he’s 3-1-0 with a 1.17 GAA, .962 save percentage and a shutout in five games. The Kings can beat anyone in a seven game series with those kind of numbers coming from the net.

While there are other teams that are potential contenders, such as the Montreal Canadiens, the Detroit Red Wings, the New York Rangers and of course, the Chicago Blackhawks, there are flaws in each of those teams that make them susceptible to being upended. The playoffs are still four months away but it’s never too early to take a shot at who might be skating around with the Stanley Cup when the playoffs are all said and done. Feel free to chime in with your thoughts as to who you think will be the Stanley Cup champs at the end of the season.

If you want daily NHL betting tips then head over to the NHL homepage where you’ll find accumulators, daily double, underdog tips and more!