Sunday sees one of the biggest games of the Premier League campaign as Liverpool head to Old Trafford. The Reds make this trip needing to win every one of their remaining league games to make the top four according to Jamie Carragher.

While United have the Europa League to distract them, their four-goal lead means they can make a real push to end Liverpool’s Champions League ambitions on Sunday. We expect both sides to be fired up, making this clash a perfect one for a same-game multi.

Below you can find our bet builder tips, which can be backed as a four-fold at 30/1 with Betfair. For more football predictions, head over to our football tips page. 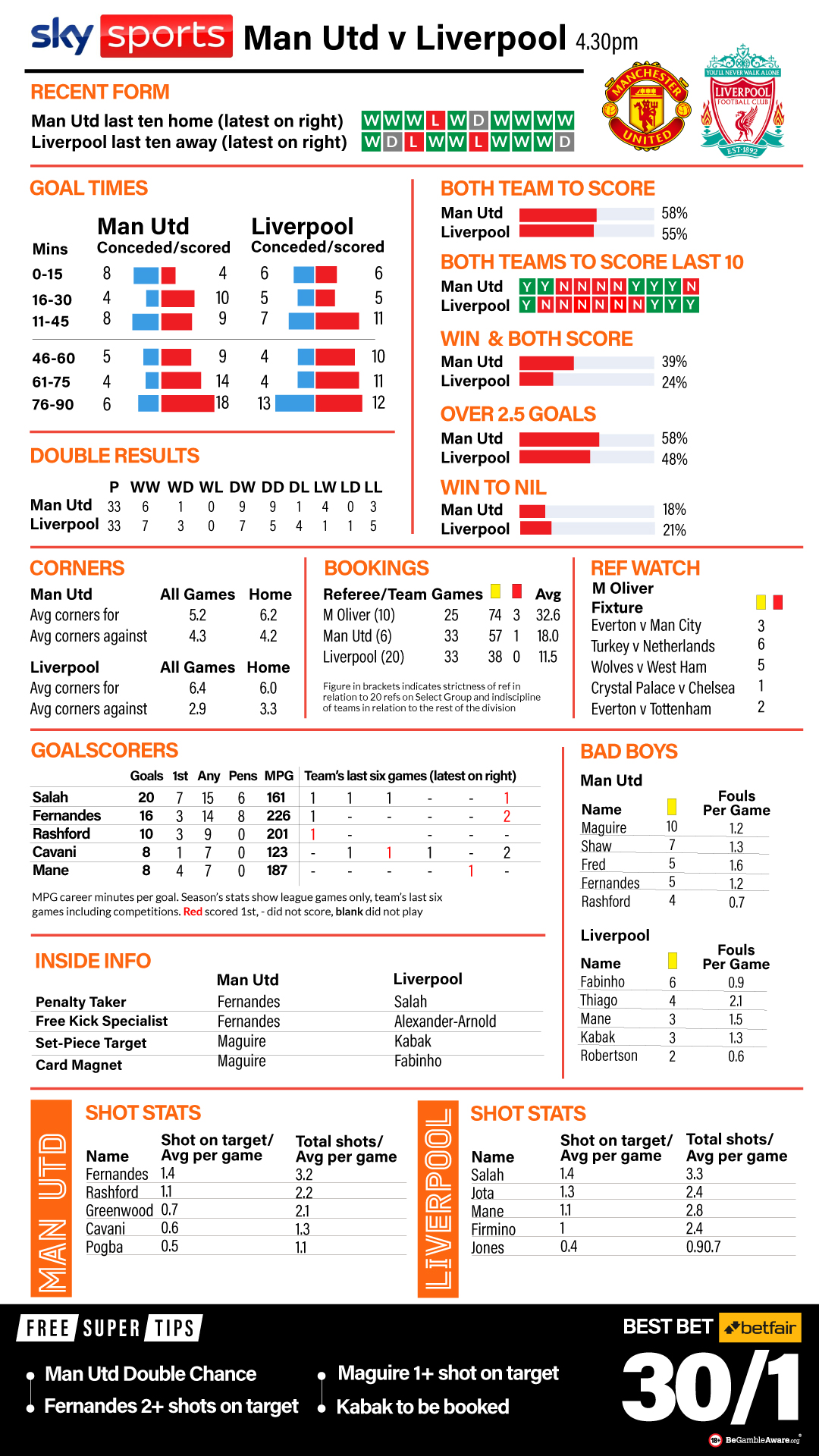 Liverpool may be the side in need of a win, but they’re also coming into this game having won once in their last five matches. Meanwhile, the Red Devils are unbeaten in 13 Premier League games and they come into this one full of confidence after a thumping midweek win.

Liverpool have won once in their last 10 league visits to Old Trafford and the Red Devils are unbeaten in all eight of their meetings with the top six this season. We see them gaining at least a point in this clash, so we’re backing the hosts on the double chance market.

Bruno Fernandes has been coming in for a bit of criticism after a quiet run, but the midfielder showed his class in the drubbing of Roma. He scored twice and assisted two more in United’s 6-2 win. He frequently delivered in big clashes for the Red Devils and this one shouldn’t be any different. We’re backing Fernandes to chip in with 2+ shots on target.

Harry Maguire doesn’t test the goalkeeper as often as Fernandes, but the centre-half is a real threat at set pieces. While he doesn’t score often enough, Maguire has averaged 1.1 shots per Premier League game this term. With Liverpool short-handed at the back expect him to be a target from corners again, so he’s worth backing to take at least one shot.

It could be a tough afternoon for Liverpool centre-half Ozan Kabak, who will be trying to deal with the pace of Marcus Rashford and Mason Greenwood. The January signing hasn’t quite plugged the gaps in Liverpool’s defence and he’s likely to be the defender targeted by United with Fabinho alongside him.

Kabak has been booked on three occasions in his last nine Premier League games and with a stern test in prospect this weekend we see him ending up in the book.