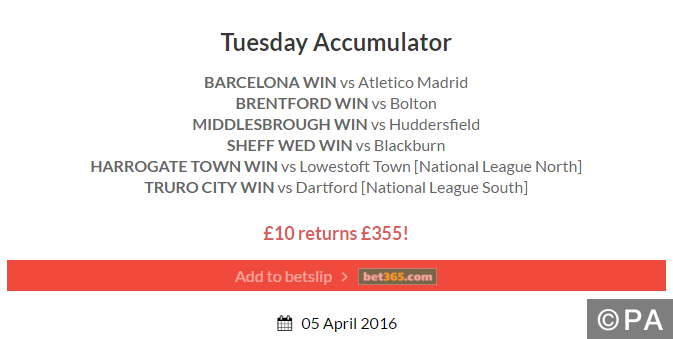 Everyone dreams of winning an easy football accumulator and that’s what our tipsters bought to the table on Tuesday night as our daily win accumulator landed at a huge 34/1!

There was a decent amount of footy on Tuesday night and our tipsters had picked out 6 teams to win from the Champions League and from the English Football League going all the way down to the lower National Leagues.

Barcelona were the shortest price in the acca but probably had the hardest game as they came back from 1-0 down to Atletico to win 2-1 through a Luis Suarez brace scored in the final half an hour.

Brentford started brightly in their game versus Bolton and went 3-0 up after just 36 minutes meaning this leg was all but won. Bolton scored a consolation goal in the second half but it was a little too late as they eventually lost 3-1.

Middlesbrough also kicked on early in their Championship game against Huddersfield as they went 2-0 up in the first half through Leadbitter and Ramirez. Ramirez then added his second and Boro’s third in the second half to wrap up the points and another leg for our acca.

Sheffield Wednesday went 1-0 down early on in the second half versus Blackburn but equalised just 5 minutes later. Blackburn were then reduced to 10 men and it was all going Wednesday’s way when they scored the winner in the 62nd minute through Ross Wallace.

The final two legs were from lower down the football league with Harrogate Town & Truro City from the National League North and South respectively. You might usually expect tight games at this standard of football but these sides made it look easy for our bet as Harrogate stuffed Lowestoft 4-0 and Truro cruised to a 3-0 victory over Dartford.

6 legs – 6 wins. Overall our picks won 17-3 on an aggregate scoreline across all games making our 34/1 Tuesday Accumulator look easy!

Here at Free Super Tips, we provide free football betting tips every day. These include accumulators, both teams to score, doubles, challenges and bankroll builders so make sure you check them out and bookmark our tips page so you can join in the bookie bashing!

It was brilliant to see so many of our followers on this huge winner! The bookies definitely got bashed on Tuesday night – take a look at some of the winners below:

Head over to our Football accumulator tips page to see today’s free tips and land yourself a huge winner!

League One predictions and best bets for Saturday afternoon with 40/1 acca!
Football