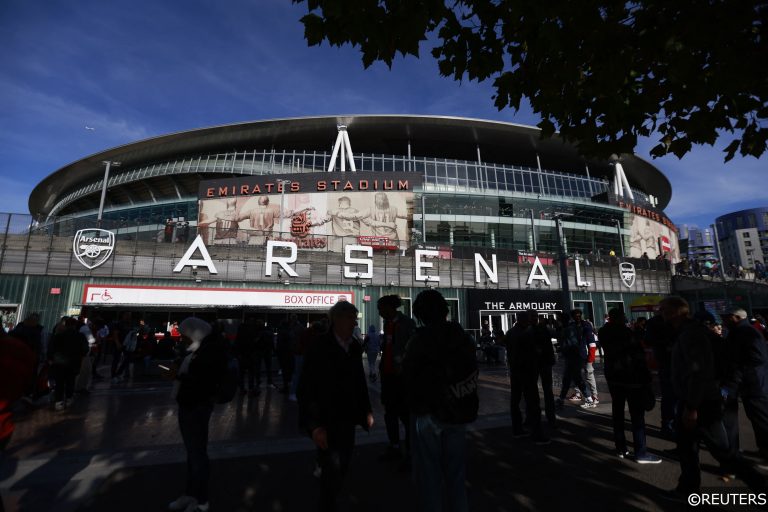 The huge games in the Premier League just keep on coming and there is none bigger this week than Manchester United’s visit to table-topping Arsenal.

Our big match preview predictions another win for the Gunners and, to add to that, I have put together a 38/1 Ultimate Bet Builder for Sunday’s clash.

It looks as if it is going to be an open game at the Emirates and both teams can make their mark.

While the Gunners are top of the Premier League, they have kept just two clean sheets in their last 12 home league matches and United have found the net in each of their last nine away matches.

It is also worth noting that there have been 13 goals in the last three meetings.

Arsenal to have six or more shots on target

The Gunners are likely to go on the front foot to try and widen the gap between themselves and the Red Devils and it seems likely that the league leaders will create plenty of chances.

Back them to have six or more efforts on target, which they have done in all but one in their home league games this term, including games against both Liverpool and Tottenham.

Bukayo Saka to score or assist

The England wideman did all the hard work to help Arsenal into the lead in last week’s north London derby and he has been a significant contributor to what has been a fine first half of the season at the Emirates.

He has scored six goals for the Gunners and is also the team’s biggest assister with a tally of seven, so he should be at the centre of much that Mikel Arteta’s team create, so expect him to make a positive contribution.

Martin Odegaard to have a shot in each half

The Norwegian has become a significant player in the final third for Arsenal and he scored his fifth goal in his last seven appearances when he fired home their second goal in the 2-0 win at Tottenham.

He was not shy to try his luck from outside the box on that occasion, which should increase his confidence further and it is worth chancing he has a pop at goal in each half of Sunday’s clash.

Eriksen is becoming a vital cog in Erik ten Hag’s United and the Dane is rediscovering the class that once made him one of the Premier League’s top playmakers.

Expect him to play a pivotal role in United’s attacks and he could well add to his season’s tally of seven assists as the Red Devils look to build on their recent fine form at the Emirates.

Marcus Rashford to have one or more shots on target

Rashford had scored eight goals in seven appearances before failing to find the net at Crystal Palace on Wednesday but it was not for the want of trying.

The England forward had four shots on target against the Eagles and that was the eighth straight game in which he has at least made the goalkeeper work on two occasions.

Just one effort on target will help us sign off this element of the Bet Builder though for Sunday.