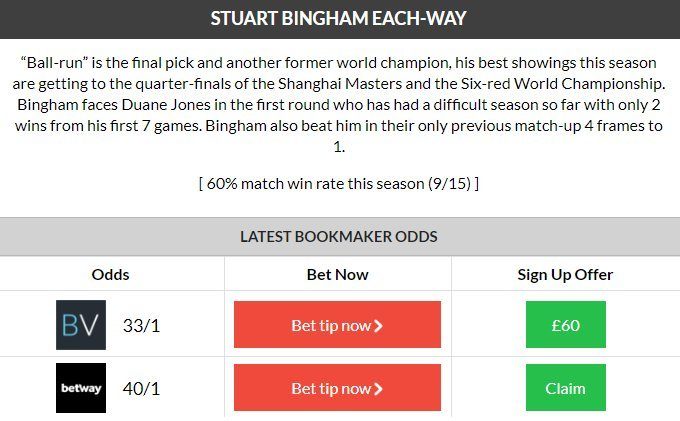 Yet another winner for FST this month! Our snooker analyst has delivered the goods on the English Open, backing Stuart Bingham to win the tournament at 40/1!

Bingham 4-0 Jones
Bingham went into the opening round as a big favourite against the world number 81 who has not made it past the last 32 so far in any ranking event. Bingham won the previous match up between the two 4-1 and this match took a familiar trend. Bingham cruised to victory with the highlights being his 109 & 64 breaks in the last two frames to book his place in round 2.

Bingham 4-0 Vafaei
This looked a potentially more difficult game against world number 41 Vafaei who had previously beaten Bingham 4-3 in there only previous match. Vafaei is also a former China Open semi-finalist and world amateur snooker champion. But it was Bingham who seized the initiative with a 72 break in the opening frame. Impressively Bingham restricted his opponent to just 58 points in the entire match as he wrapped up the whitewash with breaks of 55 & 76 in the last two frames.

Bingham 4-3 Un-Nooh
Round 3 turned out to be one of the best games of the tournament and possibly Bingham’s toughest on route to the championship. Un-Nooh is a former 6-red world champion and 4 time ranking event semi-finalist. He had also previously hit a 147 in his first frame of the tournament but this time it was Bingham who got off to a flying start taking a 2-0 lead with breaks of 131 & 52. Bingham’s resolve was tested as his opponent fired back by taking the next 3 frames with breaks of 80, 61 & 81. With Bingham now facing elimination he calmed took the match to a deciding frame with a 71 break in the next. Un-Nooh made the first mistake from a long shot which hit the jaws of the pocket and left the table which let Bingham in with a chance to build a lead. He kept control of the frame to win it comfortably.

Bingham 4-0 Walden
The next opponent was a more familiar rival for Bingham having previously played Walden on 11 occasions with Bingham leading the way 7-4. Walden is a very capable player who has previously won three ranking events and had been ranked inside the world’s top 30 for the last decade. So it was expected to be a dangerous challenge here but the match did not play out that way with Bingham easily taking a 2-0 lead with a 82 break in the second frame. The next was perhaps the key to victory as it was very close, Walden scored a 50 break but it was not enough as Bingham made the clearance from the final red to go 3-0 up. This was followed up by a 62 break in the final frame to complete the rout.

Bingham 5-2 Carter
At the Quarter final stage Bingham was drawn against the tenacious Ali Carter. The world number 21 and former four time ranking event winner and twice world championship runner up went into the game leading the head-to-head 15 to 7. However it was Bingham who once again who got off to the good start taking a 2-1 lead with breaks of 138, 58 & 70. Carter then levelled the match at the interval with his highest contribution of the match with an 80 break. After the interval Bingham took control winning the next three frames to take the match. Frame six proved critical with Carter missing on a 69 break allowing Bingham to step in with a classy 70 clearance to steal in on the final black.

Bingham 6-3 Maguire
The semi-final was billed as another close to call match with Bingham leading the head-to-head 8-7 over the world number 16. Maguire is another tough competitor who has previously won five ranking events. The matched predictably was locked at 2-2 at the interval with Bingham’s best effort being a 76 break in frame four. Resuming play the next two frames were shared to make it 3-3 with a 93 break from Maguire quickly followed by a 72 break by Bingham. The rest of the game went a bit scrappy with Bingham coming out on top in three close frames to reach his first ranking event final this season.

Bingham 9-7 Davis
Unpredictably Bingham was matched up against the hugely experienced Mark Davis who had done superbly to reach the final by beating Higgins & O’Sullivan in the previous two rounds. Once again Bingham went into this game like all his previous ones as a favourite, however the head-to-head favoured Davis 13 to 11. The nerves were on show early on with plenty of mistakes, Bingham opened up a narrow 3-2 with breaks of 51 & 75. Suddenly the game stepped up a few gears as both players settled into it. The next 6 frames were shared following a barrage of breaks, 72, 136 & 94 from Davis and 77, 78 & 73 from Bingham who remained ahead 6-5. Perhaps the biggest turning point was in frame 10 where Davis was on a 40 break only to feather the cue ball while in position to score further, allowing Bingham to step in and snatch the frame. Davis fought back to take the next two frames and a 7-6 lead with a 65 break in frame 13. This was however the last frame he would win as Bingham come good at the crunch time of the match winning the next three frames and the championship aided by breaks of 82 & 102.