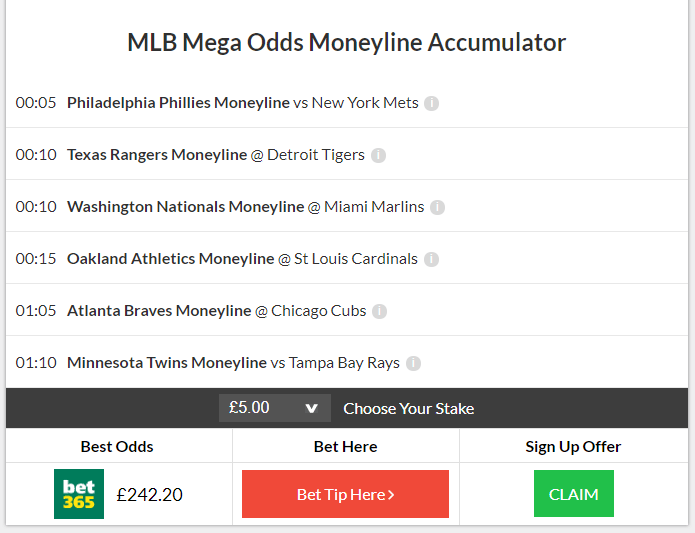 Exactly one week after our huge 49/1 MLB Accumulator + Double winner, our baseball analyst has gone and done it again with another massive overnight winner!

Likes and RT’s much appreciated for these two overnight wins!! pic.twitter.com/iLIk7njXub

Our Mega Acca started in Philadelphia, where the Phillies took on the New York Mets. We went for the home team and this was no easy ride. In the bottom of the sixth, the Phillies were trailing 4-0 before getting their first run on the board. A huge seventh inning drew the hosts level before former Mets man Jay Bruce ripped an RBI double in the tenth to win the game 5-4 for the Phillies – what a comeback and what a start!

Next up were Texas Rangers. They faced the Detroit Tigers on the road and this was a slow burner. The teams were tied 1-1 as the game went into the fifth but two quick-fire home runs from Jeff Mathis and Danny Santana gave the visitors a comfortable 4-1 lead. The action very much dried up after that as the Tigers were unable to respond and the Rangers saw the game out.

For our third and fourth legs we needed the Washington Nationals and Oakland Athletics to win. Oakland were dominant in their game, though the scoreline doesn’t show it. Two home runs from Beau Taylor and Matt Champman were enough to seal them the win after Daniel Mengden pitched six scoreless innings. The Nationals game was much more dramatic. After five quiet innings, the Nationals found themselves 1-0 behind. A three-run homer from Matt Adams in the sixth got the action going and the runs kept coming as they finished 7-5 ahead.

There wasn’t much to worry about for our fifth leg over in Chicago either as our fifth leg, Atlanta Braves, had ground up a dominating lead over the Cubs. Five runs in the opening three innings were enough to see the game out 5-3 and earn pitcher Dallas Keuchel his first win for the Braves. Nerves were high as we went into the last leg of our 47/1 MLB Mega Accumulator.

Finally, our attention turned to the Tampa Bay Rays @ Minnesota Twins game, where we needed a win from the hosting team. The Twins held the lead for most of the game but the Rays kept chipping away and found themselves 4-3 ahead at the top of the seventh… it was crunch time! Step up Twins right-fielder Nelson Cruz, who hit a three-run, two-out double to put them 6-4 up and land our 47/1 acca!!!

Here are just some of the betslips that were sent in to us from our Twitter followers:

Cheers lads nice to wake up too pic.twitter.com/vKqJ7g1yy9