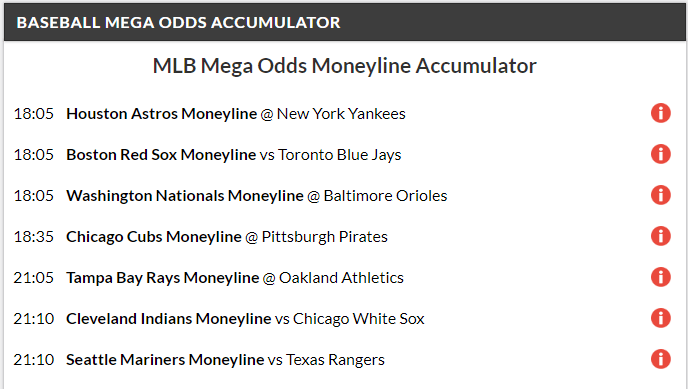 What a night for us here at FST!

The 2018 MLB Season is only two months old and our baseball analyst has done his magic yet again!

We landed at 48/1 Mega Odds Accumulator this Monday Night!

The Acca consisted of 7 legs and here’s how it went:

WHAT A START TO TUESDAY!

We started with three early games at 18:05 and all three teams that we backed won fairly easily.

We were down to only three games left on the Acca!

Tampa Bay and Oakland played a very odd game which required extra innings to decide the winner. Neither team could score in regulation and we had to play an extra four innings until the Rays finally scored a run to put us over the top in this one!

Next up were the Cleveland Indians at home against the Chicago White Sox. It was a completely different game than the Tamba Bay one, both teams scored for fun here and after falling down 5-2 after the 4th inning, the Indians bounced back with a 5-0 score in the 5th to pull away for good in this one. They scored two more in the remaining four innings to win it with a 9-6 scoreline in the end.

And finally a strong 6th inning by the Seattle Mariners gave them a 2-1 win over the Texas Rangers! It was their 4th win in a row, but more importantly it was the final game of our Accumulator!

We have daily Accumulators and Doubles on the MLB. With the NBA & NHL seasons coming to an and soon, the MLB will be our main focus for the summer when it comes to US Sports! Make sure you bookmark our Free Baseball Predictions page so you don’t miss any more winners!

Our followers once again woke up to a massive winner and here are some of the betslips that they sent to us on twitter:

Takes the edge off going back to work!! Buzzing @FootySuperTips pic.twitter.com/f06yVJoZMd

@FootySuperTips great tip ! Nice to wake up to this in the morning ! pic.twitter.com/yEvpRWwjOO