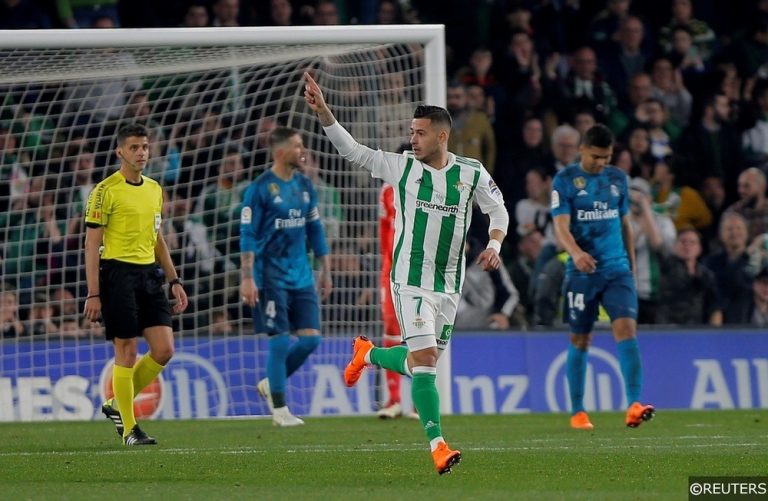 20/1 Both Teams to Score Accumulator

The accumulator kicked off in Holland where the first two legs kicked off at 13:30. The first leg landed inside 60 minutes as Heerenveen raced to a 3-0 half time lead and we looked in trouble from the get go however Willem II managed to bounce back in the second half netting in the 54th and the 62nd minute as they eventually lost 3-2. They other dutch leg landed inside 25 minutes as VVV opened the scoring on the 20th minute with the home side replying on the 24th minute from a penalty.

Over to Spain next as Real Betis hosted Getafe and the away side got off to a flyer as they dominated the first half and went into half time 2-0 up. Betis played better in the second half but it wasn’t until the 75th minute when Joaquin popped up with a goal. It wasn’t enough to get them back into the game however as they went down 2-1.

The penultimate leg took us to Belgium, as bottom of the table played an Anderlecht side who have been struggling recently. Santini opened the scoring for Anderlecht and in the 67th minute Gerkens doubled their lead as they looked like strolling to a comfortable win. Thankfully for us Lokeren did hit back thanks to Cevallos and take us to the final leg.

Finally was the big game from Italy, as Napoli took on runaway leaders Juventus. To say it was a fiesty affair would be putting it lightly as we saw 2 red cards and 3 goals. An early red card for Napoli had us in trouble and Juventus punished them for it as they bagged twice to take a 2-0 lead into half time. Napoli improved in the second half, largely thanks to Pjanic picking up a second yellow for Juventus. The Napoli pressure paid off as in the 61st minute Callejon found the net and saw us land our Both Teams to Score Accumulator

Every week our Premier League tipsters and statisticians compile the best corners and cards bets for the weekend’s Premier League games and publish it in our Corners and Cards Blog. These are great for bank building, accumulators and also for creating your own bets.

The accumulator kicked off on Saturday as the North London derby took centre stage. We wanted yellow card gluten Granit Xhaka to pick up yet another card, and what better game for him to get one than a fierce local derby. Xhaka didn’t disappoint as he got himself booked on the 74th minute.

Next up we headed to the 3pm kick offs and in particular Brighton as they hosted all but relegated Huddersfield. Glenn Murray picked up a booking on the verge of half time and deep into the second half Florin Andone picked up Brighton’s second yellow for unsportsmanlike conduct.

Next in line was a struggling Fulham side and we needed them to pick up 2 cards against a team in Chelsea likely to boss the possession. Chambers picked up the first booking of the day on the 22nd minute for holding and early in the second half Kevin McDonald picked up the Cottagers second booking and saw us onto the final leg.

Lastly we saw one of the most important Merseyside derbies in recent times as Liverpool badly needed a win to keep pace with Man City and Everton badly wanted to beat Liverpool to dent their title hopes. All would make you think it would be a fiesty affair and full of cards, however if you looked at the stats just one of the last 11 Merseyside derbies had seen 6 or more cards. This turned out to be the easiest leg of the accumulator and the statistic was spot on as the game saw just three cards as Walcott, Robertson and Fabinho went into the referee’s notebook.

Want more from our experts?

Remember to follow our Free Football Predictions page of our website to make sure you stay up to date with the latest Football Accumulators. We also have Match Previews and an excellent new Stats Tool that you can use to create your own bets. Also our News Column is a fantastic place to keep up to date with as fresh betting content is posted frequently so be sure to bookmark it.