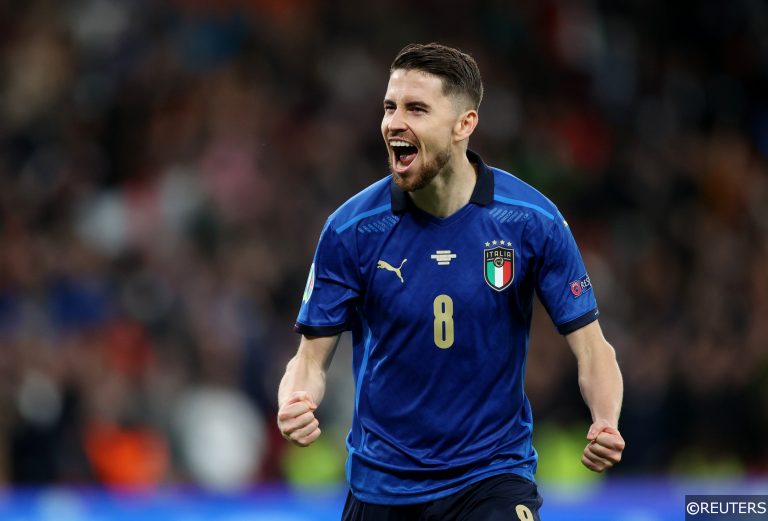 England lock horns with Italy in Sunday’s Euro 2020 final at Wembley and the Three Lions will be hoping to end 55 years of major hurt in front of a passionate home crowd.

Gareth Southgate’s men have been on a remarkable journey and after losing in the World Cup semi-finals in Russia three years ago, England went one better and defeated Denmark in extra-time on Wednesday to seal their final berth.

The Azzurri needed extra-time and penalties to see off Spain in their semi-final showdown on Tuesday and they are currently on a 33-match unbeaten run.

This promises to be an intriguing heat between two confident outfits and it may be settled by a fine margin. We look at five key battles that could determine the outcome in London.

Italy’s midfield three is super strong with Marco Veratti, Jorginho and Nicolo Barella in attendance and Kalvin Phillips and Declan Rice are going to have to be on the ball if England are to triumph.

Pass-master Jorginho is the one that keeps Italy ticking and England must limit his time on the ball, with the pressing duties likely to fall on the shoulders of Leeds midfielder Phillips, who has had an excellent tournament.

That enhances the chances of a Phillips booking, who is 15/8 with bet365 for a card. The Leeds man was booked in England’s 2-0 win over Germany and he collected ten yellow cards from 29 Premier League appearances this season.

England must stop Jorginho, who broke the record with eight interceptions against Spain in the semi-final, if they are to triumph.

Raheem Sterling is having the tournament of his life and that could spell danger for Italy’s stand-in right-back Giovanni Di Lorenzo, who has replaced the injured Alessandro Florenzi.

Sterling, who has three tournament goals and one assist to his name, has been a nuisance throughout and with his confidence on the rise Di Lorenzo could be in for a torrid time.

The Napoli man was regularly exposed by Spain’s Dani Olmo in the semi-final and this could be an area England look to expose.

With that in mind, Sterling is an interesting candidate to get on the scoresheet again at 11/4 while a Di Lorenzo card also makes an appeal at 3/1.

With the impressive Luke Shaw also looking to get forward from left-back, Di Lorenzo, who was booked in the win over Austria and very fortunate to not pick up a card in the Spain showdown, could be exposed.

Bukayo Saka has been one of England’s surprise packages at Euro 2020 and he has impressed ever since being handed his first start against Czech Republic.

The Arsenal teenager was man of the match on that occasion and he has also shone in the wins over Germany and Denmark, with him grabbing the assist for the equaliser against the Danes.

Saka’s pace, endeavour and fearlessness makes him a potent weapon against the Italians and Emerson will have to be on his guard.

The problem is, Italy like to attack with width and they often utilise their wing-backs as an extra attacker.

Leonardo Spinazzola was one of the players of the tournament from Italy’s left-back position before he got ruled out through injury. Emerson is now expected to adopt that role.

And if Emerson chooses to neglect his defensive duties, the Azzurri could be exposed by the pace of Saka on the break. The Arsenal youngster is 9/2 with bet365 to get another assist, which makes plenty of appeal.

Harry Kane has finally found his mojo but the Italy centre-back partnership of Leonardo Bonucci and Giorgio Chiellini, who also play together at Juventus, won’t make things easy for him.

Kane failed to score in the group stages, but now has four goals for the tournament after netting a brace against Ukraine as well as against Germany and Denmark.

Chiellini is Italy’s organiser and it will be a physical battle with Kane, who may be marked out of the contest by Azzurri’s talismanic skipper.

What the 36-year-old lacks in pace, he makes up for with his understanding of the game and he has excellent positional awareness. That makes Kane’s price of 6/4 to get on the scoresheet poor value, with Sterling a far better alternative.

Federico Chiesa has made a real impact since breaking into Italy’s starting 11 and he is someone England need to keep under control.

The Juventus livewire scored from off the bench in the extra-time win over Austria in the round of 16 and he opened the scoring against Spain in the semi-finals.

He is a pacy individual, who is full of determination, and it will be an interesting battle with England left-back Luke Shaw, who has had an outstanding season for club and country.

Shaw has been an integral part of an England defence that have yet to concede a goal from open play and kept clean sheets in five of their six games. Chiesa carries a threat but Shaw, who is so defensively strong, looks the right man to stop him and is 8/13 in the over 1.5 tackles market.