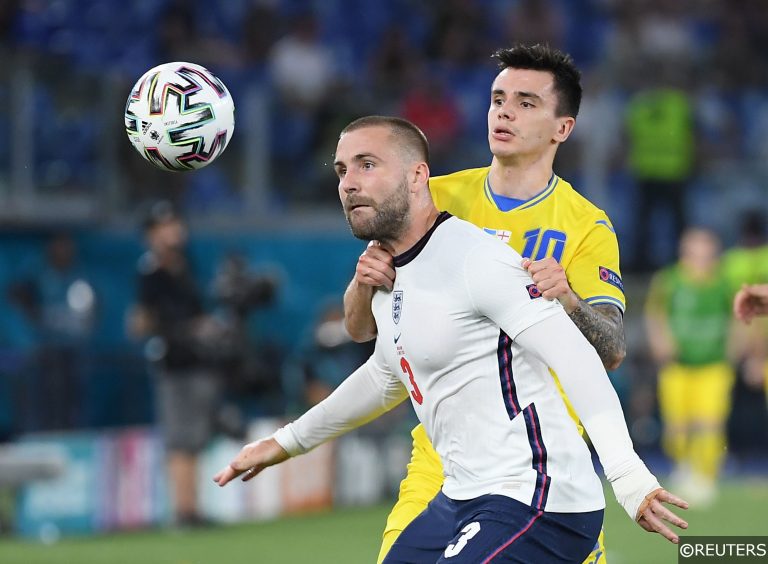 Euro 2020 is almost over and on Sunday either England or Italy will be crowned as champions after the 51st game. The tournament has been action-packed so far, with numbers on the goals front – 140 goals at an average of 2.8 per-game – and cards front – 142 yellow cards and 5 reds – creating a perfect storm for Bet Builders.

We’ve taken the opportunity to compile the ultimate run down of all the best markets for the Euro 2020 final on Sunday. Find our seven market insights and best bets for those below!

To lift the trophy market

Home advantage has been massive for England during Euro 2020 and that was evident in the last 16 win over Germany and the semi-final victory over Denmark at Wembley.

Italy have, of course, been excellent throughout the competition and we’re not sure the Three Lions will be able to take the title in 90 minutes, but they raise their game in extra time against the Danes and should be able to come through if taken the full distance by an Italian outfit who started to tire in their penalties success over Spain in their last four battle.

Best Bet: England to life the trophy at 8/11

England have scored in all of their Euro 2020 fixtures bar the 0-0 stalemate with Scotland in the group stages.  That goalless draw feels like a distant memory now Gareth Southgate’s side are through to the final, and as an attacking force it is probably fair to say they have improved with each game.

Italy have only drawn a blank once, in their last 16 tie with Austria, and both have the quality to grab a goal on Sunday.  Italy have been gung-ho in attack and are averaging an impressive 18 attempts per game with five on target, while England are averaging a more modest 9.67 per game but have a better strike rate with 4.17 on target and we’re backing both teams to score.

Italy have shared their 12 goals around with six different members of the Azzurri squad getting on the scoresheet over the course of the tournament. In contrast, England have Harry Kane and Raheem Sterling to thank for seven of their 10 tournament goals and we’re backing the latter to find the back of the net anytime on Sunday.

Sterling has managed three goals so far but that could well have been four had it not been for the outstretched leg of Simon Kjaer in the semi-final and the Manchester City man appeals at a bigger price.

New Betfair customers can get £50 in football Bet Builders when they sign up and bet £10 through the link below!

Luke Shaw is England’s assist leader with three but at a bigger price we feel Italy’s Marco Verratti is worth a punt in this market.  The Paris Saint-Germain midfielder has two assists in four games and has made 19 passes in those games that have led to an attempt on goal – more than any other Italian player bar Lorenzo Insigne, who has played in five games. 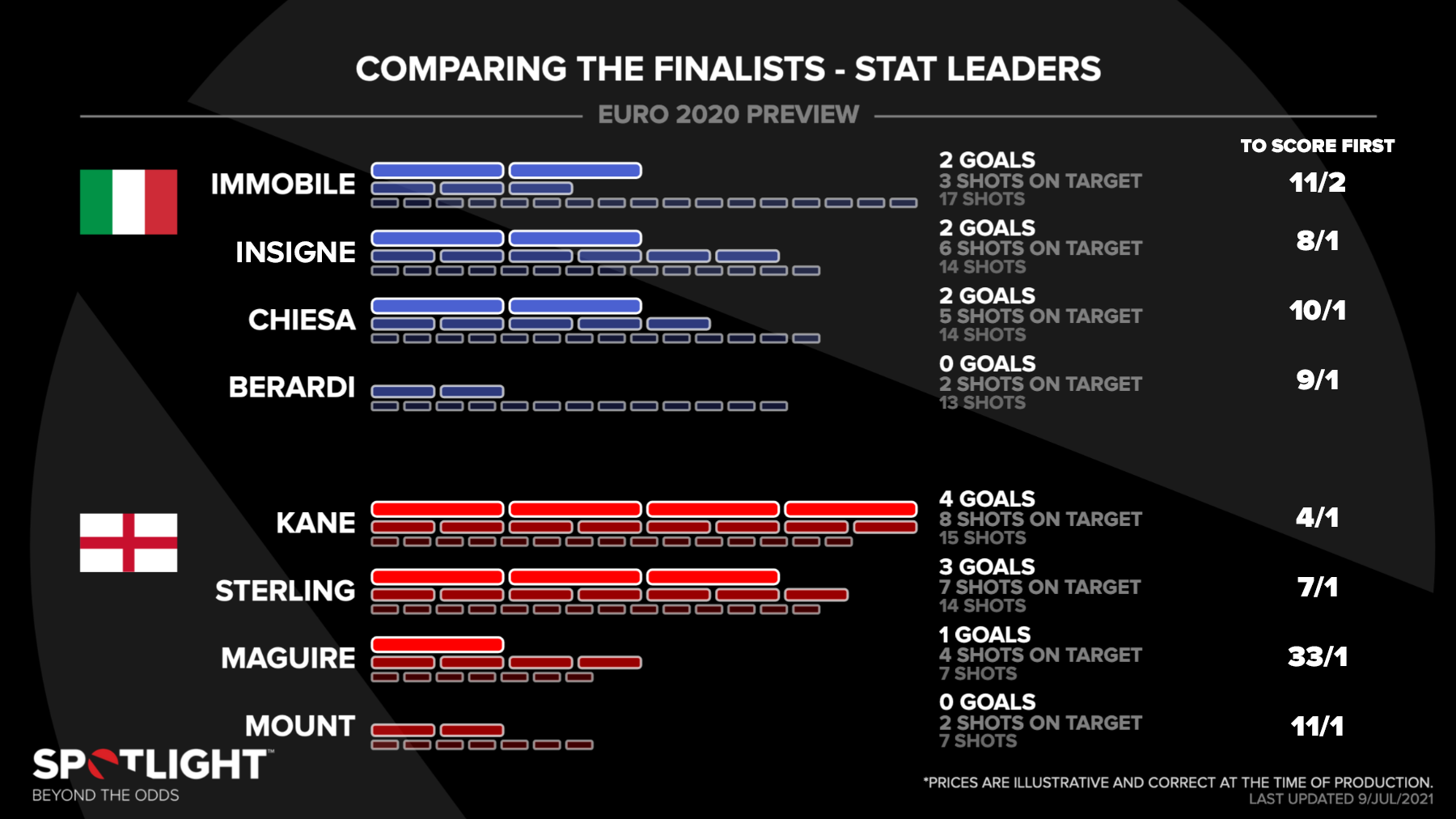 Federico Chiesa was Italy’s semi-final hero with the opening goal and we feel he can register a shot on target in the showpiece.  The Juventus forward has managed five shots on target from 14 attempts at Euro 2020 and has adopted a shoot-on-sight policy in the last two games, with five attempts in the quarter-final against Belgium and two in the victory over Spain.

Best Bet: Federico Chiesa to have 1+ shot on target at 4/5 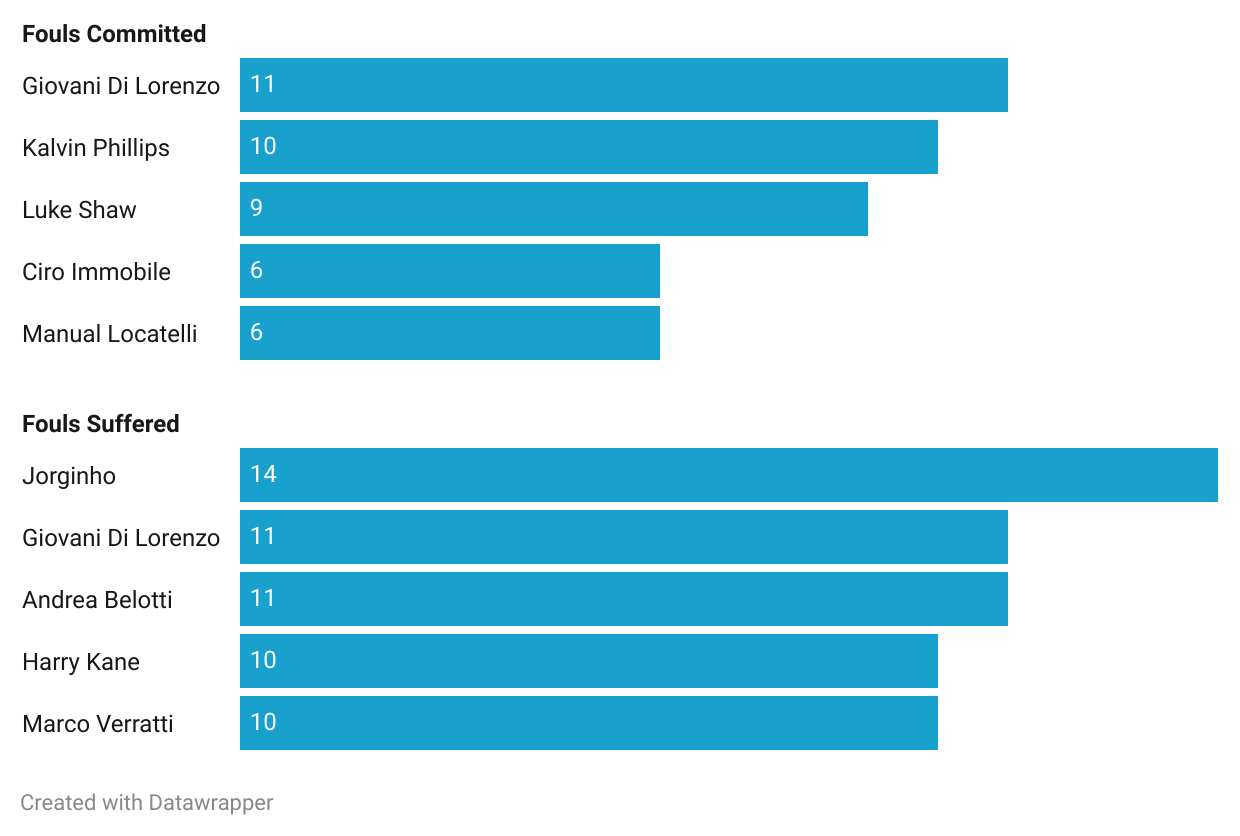 England midfielder Kalvin Phillips stands out as a candidate for a card at anytime despite only having picked up one yellow card so far.  Harry Maguire has two bookings but has only committed three fouls in total, while Phillips has committed 10 fouls so far.

There is a chance this fixture could be a bit of a midfield battle and the Leeds star will be in the thick of it if that does prove to be the case.

Best Bet: Kalvin Phillips to be booked at 2/1

Italy have forced just nine corners in total since the knockout stages began and England haven’t fared much better with 11 so we’re not expecting huge numbers here.  England have managed six corners in three of their six games so far, so at just shy of evens we feel there is value in backing over 4.5 England corners as Italy have had to defend 15 corners over the course of their last two games.