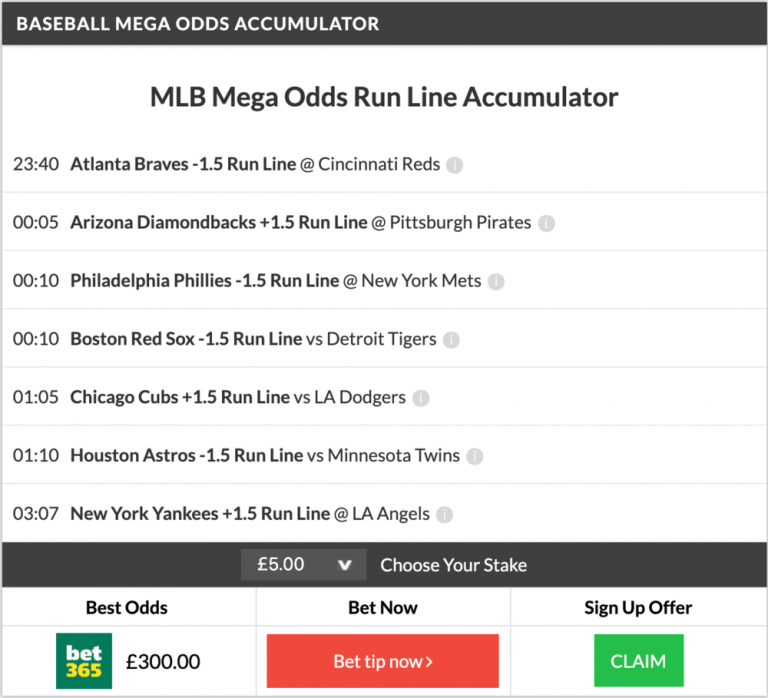 Our baseball analyst absolutely crushed it last night by landing a CLEAN SWEEP on the MLB Tips!!

The Mega odds Acca landed at 59/1 odds, the regular Accumulator came in at 12/1 and the night was capped off with a MLB Double winner!

The Acca started off with an away win by the Atlanta Braves who took care of business against the Cincinnati Reds. It was Atlanta’s 5th away win of the season which has kept them in the middle of their division standings. The game was tied at 1-1 when the Braves took the lead in the 5th which they doubled in the 9th inning to get a 3-1 win.

The Arizona Diamondbacks dominated the Pittsburgh Pirates for the 3rd time this season. This time it was 11-2 and it was never really a contest as Arizona led 4-0 after the first two innings and slowly built their lead throughout the game.

Another away win came in courtesy of Philadelphia as the Phillies beat the New York Mets 6-0. Early on they took a 1-0 lead in the opening inning and it wasn’t until the 8th and 9th when they scored 5 more runs which settled the final score. It was Philadelphia’s 13th win on the season.

A dominant 8th inning by the Boston Red Sox helped them beat the Detroit Tigers. The lead was already at 4-1 for Boston before that inning, but a 7-0 run in the 8th pushed it to 11-1 and the game was pretty much over. Detroit scored 3 runs in 9th, but that was all she wrote here!

The Chicago Cubs beat the LA Dodgers at home in a close one. They needed a decisive 6th inning in which they scored 6 runs to take control of the game. The Dodgers fought back in the 8th by scoring 3 of their runs, but luckily for us that was the final score as the game ended 7-6 for the Cubs.

The Houston Astros didn’t have much trouble against the Minnesota Twins at home. Houston won it’s 8th home game of the season in 9 attempts. In the end it was 7-1 for Houston who stayed top of the American League West Standings with a 15-9 record.

And finally it was the NY Yankees who got a road win against the LA Angels to land our Acca! An incredible turnaround in this game got New York it’s 14th win of the season. The Angels were leading 5-0 after the 4th inning, but then the Yankees stormed back with 2 & 3 runs in the 6th and 7th inning to tie the score at 5-5. The comeback was completed in the 9th inning as the Yankees sealed the deal for their 14th win of the season and 6th on the road!

The MLB regular season is still in it’s infancy stages, bookmark our Free Baseball Tips page on the FST website so you don’t miss out on any more winners like these!

Our followers sent in a couple of their winning betslips to us on twitter: