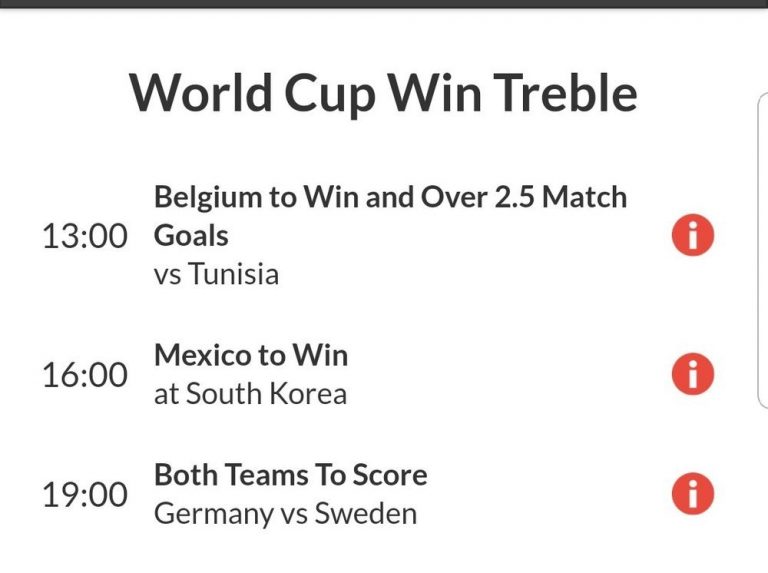 What a winner on matchday 10 of the World Cup!

The bet started off with the early kickoff between Belgium and Tunisia, where we needed Belgium to win and over 2.5 goals in the game. The game got off to the perfect start, as Belgium were awarded a penalty after just 5 minutes, which Eden Hazard coolly dispatched. Lukaku converted the Belgians 2nd just 10 minutes later, before Tunisia sparked into life, grabbing a goal back just 2 minutes later via Bronn. Our 2.5 goals part of the bet was in inside 20 minutes. Lukaku doubled his tally in stoppage time in the first half, making it 3-1 at the break. Belgium continued to run riot as Hazard grabbed his second on 52 minutes. The goals dried up for a while, before Batshuayi scored from the bench to make it 5-1, and Wahbi Khazri scored a consolation goal to make it 5-2, the way the game ended.

Next up we headed to the Rostov Arena, where South Korea took on Mexico. After defeating Germany in their opening game, we needed another win from Mexico against the South Koreans. The game got off to the perfect start, as Mexico were awarded a penalty on 25 minutes, which Carlos Vela netted to make it 1-0. Mexico’s dominance continued into the 2nd half, where Javier Hernandez grabbed his goal to make it 2-0 on 66 minutes. It looked like that would be the way the game ended, but Tottenham’s Heung-min Son struck one back in the 93rd minute, but it was too little too late and the game ended 2-1.

Finally, the Champions Germany took on Sweden, needing a win to have any reasonable hope of getting out of the group. We were looking for Both Teams to Score to land our treble. Things got off to the best possible start and the worst possible start for Germany, as Ola Toivonen netted to give Sweden a shock 1-0 lead on the half hour. That’s how the game stayed until half time. After the break, the German’s instantly responded, with Reus tapping in a cross to make it 1-1, landing our treble! Germany went on to have Boateng sent off, before Kroos netted from a free kick to give Germany a 2-1 win in the last minute, in one of the greatest games of the tournament so far.

Daily Football predictions are posted on the Free Football Predictions page of the website, so be sure to have that page bookmarked so you can get on future winners!

Here are some of the betslips sent in to us by our followers over on twitter: