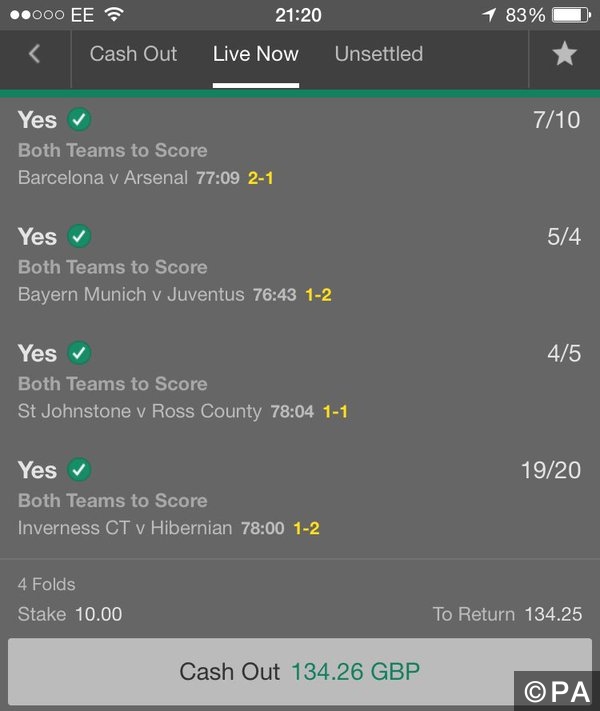 One of the most popular accumulators around is the both teams to score accumulator and here at Free Super Tips, it is one of our favourite and most profitable bets so we thought we’d share the secret to our success!

This season we have posted over £1000 profit from the BTTS market alone and this month we have already won FOUR BTTS accas! Check them out below:

How To Pick A BTTS Winner

There are plenty of leagues out there that see the goals flowing week in, week out (Holland – Jupiler, Sweden – Allsvenskan & Superettan are just a few examples) but beware of the leagues where goals can be hard to come by e.g. Greece – Football League, Morocco – Botola Pro, Spain – Segunda. We recommend you take a look at the average goals scored per game in leagues that you are not familiar with before selecting a game to go in your BTTS accumulator. Pick your games from leagues where plenty of goals are scored.

We advise you to always take a look at the percentage of games that a team has seen both teams score in their season’s fixtures. Teams can go through phases of games that involve BTTS but it is their most recent form that you will want to take in to consideration the most – the last six games is what we like to concentrate on. We also recommend you avoid including teams that keep a lot of clean sheets. Teams such as Juventus & Atletico Madrid have rarely been involved in our BTTS acca’s this season due to their very good defensive record. You’re after games where the teams are not good at defending and rarely keep a clean sheet.

An early goal is a dream start for a BTTS bet but an early goal from the away side is an an even better start. The home team have the advantage of the pressure from their fans to help them out if they go a goal down so it is always worth taking a look at the amount of first half goals a team scores, especially if they’re the away side. Pick out teams that like an early goal.

This is a great stat to check in certain leagues such as the Scottish leagues where teams can play each other as many as four times a season but don’t bother checking too far back as games further in the past can be irrelevant if teams have changed managers or players have moved on. You will find matches where the teams have had a long streak of BTTS when they play (Barcelona-Real Madrid, Liverpool-Man City) but make sure you take in to account the other points we have already mentioned before adding a game like this to your accumulator. Select fixtures that have a strong but recent trend of BTTS.

Finally and one of the most important points to consider is to check the starting lineups of the teams involved in your BTTS pick. If a team is missing their top goalscorer/s then this could impact their chances of scoring. On the other side, you could pick out games where teams are missing their key defenders or main goalkeeper therefore reducing their chances of keeping a clean sheet.

Both Teams To Score Tips