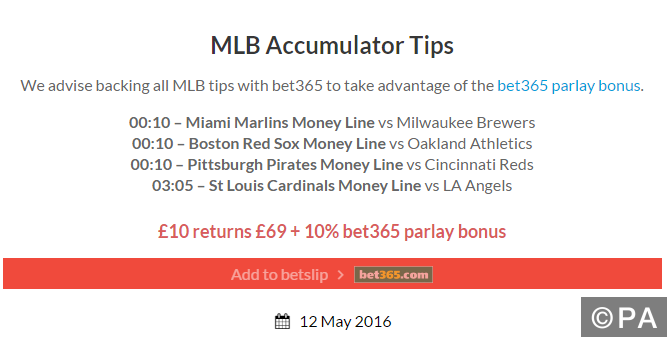 WHAT A NIGHT for Free Super Tips followers as our tipsters pick out a 6/1 MLB accumulator win to go with our 8/1 MLS accumulator win on Wednesday night’s action in the US!

RT if you were ON & Send in your winning betslips!!!

Our winning tip was a 4-fold accumulator that included 4 straight money line picks – that means 4 teams to win their games outright.

3 of the games started just after midnight with the Marlins, Red Sox and Pirates kicking it off. The Boston Red Sox made easy work of the Oakland Athletics winning 13-3 but the other legs were slightly tougher. The Miami Marlins and the Pittsburgh Pirates each won their respective match-ups against the Milwaukee Brewers and Cincinnati Reds by a single run.

The final leg saw the St Louis Cardinals take on the LA Angels at 3am. The Cardinals started perfectly for our accumulator as they took an early 4-0 lead. They eventually won 5-2 and we had bagged another overnight boom!

Firstly, well done if you got on! Secondly, congratulations if you got on both of our Wednesday night winners! Thirdly, what a great sight it was to see that many of our followers had the confidence in us to back both our MLB and MLS accumulators together for a mega boom! Check out some of the winners that were sent in to us on Twitter:

@FootySuperTips got me through the night shift. Cheers lad  pic.twitter.com/SrgQ3fi0zN

@FootySuperTips You know it’s a good day when you’re annoyed you only got on the MLB double and MLS acca #winning pic.twitter.com/mGsQuIfJ3m

We provide free MLB picks daily so make sure you bookmark our page so you too can join in the overnight booms and make yourself some money!